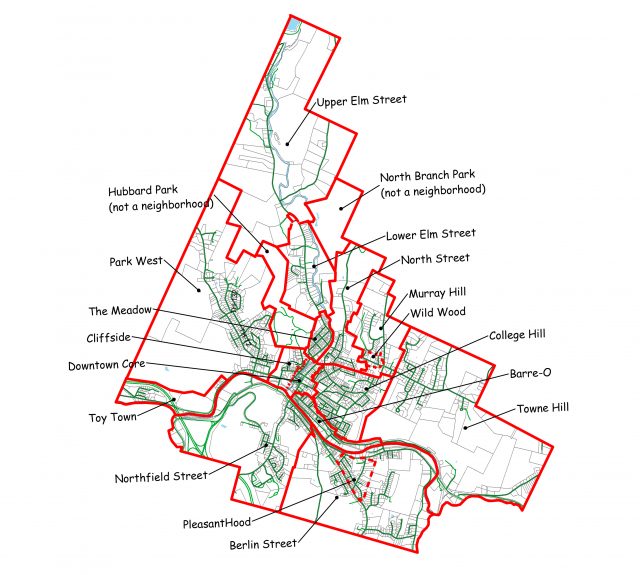 Born during the 2007–08 financial crisis, Montpelier’s Capital Area Neighborhoods group is being resurrected to help vulnerable residents cope with a new threat—the COVID-19 pandemic. Capital Area Neighborhoods was originally formed into 12 neighborhoods, each with a leader or captain, to help identify those in need and connect them with volunteers or service providers who could help. The group lay dormant after the recession ended, but discussions to revive the concept were reignited last year, and the recent virus outbreak made the effort a bit more urgent. “We think the CAN thing is a possibility for creating a level of neighborhood agency or neighborhood governance that we haven’t seen for a while that will be key to future resiliency as the climate crisis and the economic crisis expands,” said Dan Jones, executive director of the Sustainable Montpelier Coalition. “We find the COVID crisis a useful point to get the thing moving again.” The new incarnation expands the number of neighborhood groups to better represent the unique needs and qualities of each block, Jones said. The CAN leaders might, for example, create an email list of residents who want to be notified of events or services available, or drop leaflets with a list of resources for residents, such as seniors, who prefer to remain unplugged. If successful, the new CAN hopes to remain active after the crisis has passed and turn its attention to building community resistance to the effects of climate change by adapting to weather extremes, improving local food security through gardens and other means, and forging community relationships.   “We see this as building neighborhood resilience going forward,” Jones said. “We see the growing economic crisis along with the climate crisis as providing resiliency demands well into the future, so that even when we go beyond the virus crisis we see the need for the neighborhoods to provide local resilience.” Mayor Anne Watson was a supporter of reviving CAN before the COVID-19 outbreak as a way to improve communication and pool neighborhood resources. “The more that we can build relationships and understand our community assets and needs, the better we are going to fare as a city,” she said. Watson said the need to identify people who need help will last well beyond the current pandemic as the economic effects of unemployment and lost business hit home. “There are people who are still scared and upset,” she said. “For a lot of folks there’s a lot of uncertainty, particularly with finances, and we’ve yet to see what that financial damage will look like.” Leaders have already been identified for most neighborhoods, Jones said, but the group needs a captain to represent the Prospect Street–lower Berlin Street area.  Where to Turn for Help Both Jones and Watson said groups like CAN and Montpelier Mutual Aid are great places for people to sign up as volunteers, but that folks in need of nonmedical assistance should contact the newly formed Washington and Northern Orange County Regional Response Command Center (WNOC-RRCC) for help with COVID-19 issues. The command center was set up by a consortium of central Vermont service agencies, including Capstone, the Good Samaritan Haven, Downstreet Housing, and others, to connect people affected by the crisis to support services around the region. Help is available from 8 am to 10 pm, seven days a week by calling (802) 636-2025. The command center serves all of Washington County as well as the Orange County towns of Brookfield, Orange, Washington, and Williamstown.  The phone lines are staffed by volunteers, working in 3.5-hour shifts, according to a news release from WNOC-RRCC.  Those wishing to volunteer should contact Allison Levin, Volunteer Coordinator, at Allison.levin@wnocrrcc.org. To volunteer with Montpelier Mutual Aid click here. For information about the Sustainable Montpelier Coalition click here.
UNDERWRITING SUPPORT PROVIDED BY