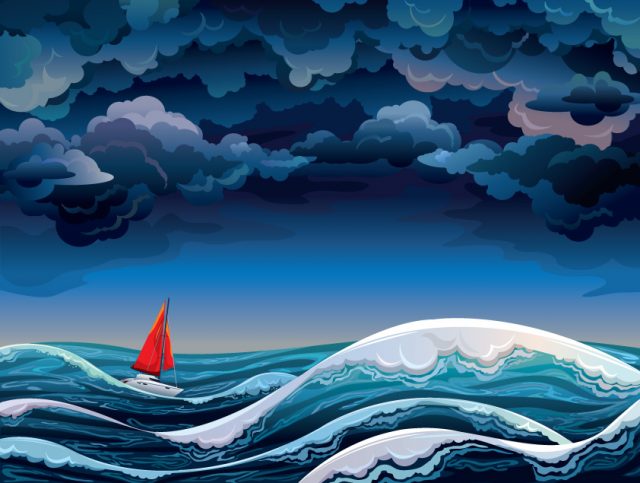 Though I’ve been at sea for most of my life, I recently made a voyage so horrible that it cast doubt on my assumption that beings are basically good. The shocking, vile behavior of my shipmates has me seriously considering henceforth adopting the lifestyle of a hermit.  That I would sign to this voyage was destined from my birth, for all of my family have sailed with captains of that venerated shipping firm, “Unitis Stamforth and Asparagus,” a firm that made its start with the slave trade.  Upon joining ship, having stowed my belonging, and settled into my bunk, a sense of foreboding bit my ankle. It turned out it was an actual rat that bit me, and that the rodent and a number of his brethren were signed as sailors for the voyage – the ship was our world, we were all species jammed in together as with Noah and his Ark. Despite delivering to the officers and the crew, promises of great sailing from his puckered orange mouth, the captain was no Noah. The first mate was a ghost whose only visible feature was his smile – really more of a smirk. I thought to myself a puckered, orange mouth and a smirk: not a good leadership combination. Weighing anchors, even before we reached the outer harbor and Inauguration Rock I observed with horror that on the foredeck had begun a most active trade in wood recently torn from the inner hull of the vessel. Captain Orange was the auctioneer and most of the humans and even some of the other species had begun to bid on the ripped up pieces of precious wood from the hull, and when a rat from the after-deck watch complained that “tearing up the damn floorboards of the vessel might not be the best for the health of all,” he was drawn, halved, quartered, nickeled and dimed and thrown overboard.   On the outward journey, long before we made the equator, captain Orange and his smirking ghost abandoned all pretense of restraint. They began by inviting guests to pay to eat at the captain’s mess. On most sea voyages this great honor is due only to the most highly ranked and discreet. All ceremony abandoned, captain Baby Doc Orange (as the weevils and half the Starboard watch now called our commander) made a bedlam of the captain’s mess, collecting money at the door, cavorting with pirates aboard from skull and cross bone ships he had commanded that we come alongside. He fired his personal valet for insufficient fawning, his advisors for advising, and most of his lawyers for explaining the law.  Things got worse as we sailed past the cliffs of Decorum, off the coast of Civility. Some of the officers, the bursar, the second mate, and the ship’s surgeon, among others, objected to captain Baby Doc Orange throwing all of the raccoons overboard for having ringed tails, the skunks for their bad habit of getting hit in the road, and a number of the humans for having better tans than the captain himself. It seems these officers were sensitive that some sailors would be needed to haul the sheets, to sail the blessed ship. It had also come to the attention of the officer corps that members of the captain’s mess were tearing the next layer of planks out of the bottom of the hull and selling them on deck at great profit. It was not so much that this cadre of officers objected to the tearing and selling of ship’s planks, for they had done so themselves on previous journeys, but felt keenly it was being done too rapidly and profited only the preferred officers in the captain’s mess.  It was captain Baby Doc Orange’s habit of building fires on deck with the boards torn from the hull that caused the professional officers, stopping far short of mutiny, to demanded a counsel to rebuke and perhaps replace the captain, even though the next in line was a ghost who believed he was holy, despite all evidence to the contrary. The ship’s chaplain, her paymaster, her clerk of law, most of the rats on the starboard watch clamored for captain Baby Doc Orange’s exoneration, rolled cannonballs on the deck at night, and later during the morning watch even, threatened their shipmates with the lash, negative tweets, and worse. Never had anyone seen such a divided ship.  Meanwhile the hull was getting rather thin and the sea grew rough, a great storm approaching. The cadre of officers, alarmed and offended by Baby Doc Orange’s outrageous plunder of the ship, his subversion of its course of sail, promised to report captain Baby Doc Orange, to the CEO and the board of Unitis Stamforth and Asparagus. The Captain’s contingent, grown slavish, rolling in new wealth, swore they cared little for the traditions of Unitis Stamforth and Asparagus, that their captain would be captain for life and that they didn’t need and sailors or wind, or even an ocean to sail the silly ship, and that they were announcing that, on their perfect captain’s orders, all beavers would henceforth be forced to walk the plank.  I could stand the tyranny and division no longer and feared the sails would catch fire from the burning of the ship’s planks on her deck. I resolved to jump ship at the next port. When we neared the shores of Electoria, I prepared to wait in line for eight hours for a skiff to row ashore, but soon we learned that there were travel restrictions because of a plague. The captain, declaring the plague “a Democrat hoax,” went ashore to shake everyone’s hand. I was stuck. All of us shipmates were stuck and the ship threatening to run aground in the harbor. I wish never to embark on such a journey again have made provisional plans to become a hermit.
UNDERWRITING SUPPORT PROVIDED BY