Home Columns A State of Mind The Dumbest Animals
Facebook
Twitter
Email
Do you remember when any animal except a human was considered dumb because humans were “speaking” animals and “dumb” meant “unable to speak?” Then the Disney film Bambi came out, which showed us that animals actually talk freely among themselves, they just don’t talk to humans. We humans can be incredibly dumb when it comes to our interactions with wildlife, although there are those rare instances when it’s just bad luck that brings humans and animals into unfortunate or even fatal contact. A bit of bad luck, I suppose, was the case of one Kyler Bourgeous, 30, who back in October 2019 was running on a trail in Antelope Island State Park in Utah when he was charged, gored, and trampled by a bison. “I thought my incident was a freak accident with really bad luck, …” said Bourgeous, who had run that particular trail more than 150 times without a problem. He had even followed proper procedures when he saw the bison by trying to get out of its view and retreat. After he recovered, he used his wild story to break the ice with a woman he met online, and this is where Bourgeous’s judgment might be called into question. He took Kayleigh Davis, 22, on a date to run some of the same trails in the park where he had been attacked. Before their run had barely begun, Davis was attacked and gored in the leg by another bison. Bourgeous apparently learned his lesson about Antelope Island. “I generally am not superstitious,” he said, “but I have this weird feeling that the bison there really don’t like me.” The case of Thomas Alexander of Yellville, Arkansas, is a bit murkier because it involved a violent act by a human on a “defenseless” animal. Last October, Alexander, who was in his 60s and an experienced hunter, shot and “killed” a buck from a tree stand with his muzzleloader. When he went to inspect the deer and field dress it, the buck turned the tables on Alexander. It had apparently played dead, then jumped up and gored him. Alexander was able to call home for help, but he died before he made it to the hospital. Authorities said it was unclear whether Alexander waited the recommended 30 minutes after shooting the deer before approaching it. More often than not, however, it isn’t bad luck. People just plain ask for trouble. Take, for example, the incident in October 2019 at the Bronx Zoo. As reported by Elisha Fieldstadt for NBC News and as recorded on video by a person at the scene, a woman climbed into a lion enclosure. The video shows the woman standing in front of a male lion and breaking into a little booty-shaking dance and waving. The lion stands motionless, staring at her, no doubt struck “dumb” by her stupidity. Or perhaps the lion had reasoned that discretion was better than a snack. It no doubt surmised, as one observer noted, “… if something happened, the lion would’ve been put down.” Being really dumb with bison seems to be an extremely popular sport among tourists in the American West. According to one report, 25 people were injured by bison in Yellowstone Park between the years 2000 and 2015. Of those incidents, 80 percent were situations in which the people approached the bison. A quick survey of cases shows that in July of last year, a nine-year-old girl was attacked by a bison near Old Faithful geyser in Yellowstone. She was with about 50 tourists who had approached to within FIVE TO TEN FEET of the bull before it decided the photo op was over.  In 2017, a 16-year-old Taiwanese exchange student was gored near Old Faithful when her group got THREE TO SIX FEET from the animal. And in July of 2015, a mother and daughter were—get this–trying to take a SELFIE with a bison in Yellowstone when it charged. They had gotten to within six yards. I myself have seen tourists get within ten yards of bison standing just beyond a shallow swale. Judging from their age, physical condition, and the presence of walkers and canes—and I’m not trying to body shame here–there is no way those tourists could have outrun the bison back to their motor homes. Most recently, on March 3, 2020, the Colorado Parks and Wildlife Department shared a video on Twitter of a woman approaching and trying to pet a large moose near a snowy crosswalk in Breckenridge, Co. before she got too close for the animal’s comfort.  The moose then lunged toward her with its front legs. At this time of the year moose do not have antlers. Otherwise it could have been nastier than what appeared to be a good attempt at a soccer tackle. So there’s a good reason why animals don’t talk to us, but it involves the other definition of “dumb,” which is “having the ability to think but not doing so.”
UNDERWRITING SUPPORT PROVIDED BY 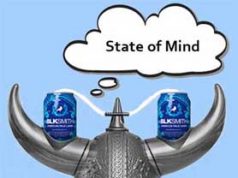