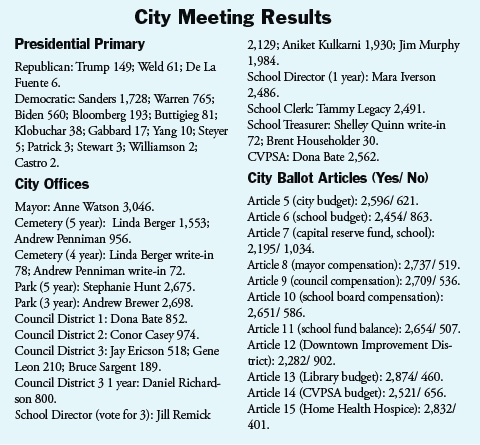 Democracy was the big winner in Montpelier’s Town Meeting Day election, as 56 percent of active voters, driven by a crowded presidential primary, came out to cast their ballots. According to City Clerk John Odum, 3,625 of the city’s 6,494 active registered voters went to the polls, far above the usual 30 percent or so turnout for the annual city meeting. So many voted, in fact, the city ran out of ballots in District 2 at the end of the day and substituted paper copies for 21 voters. Those ballots had to be counted by hand. “Clearly the presidential primary drove turnout, but what was interesting was that all the early voting—usually a pretty accurate measure of turnout—was slow, Odum said. “Even the Saturday voting was fairly light. That only changed literally the day before the election, when we got hit with an almost unprecedented number of early voters. That’s when I became concerned that an election tidal wave was coming and put out the call for more volunteer help, which folks were really responsive to. The volunteer help we received was really tremendous.” The vast majority of those voters chose Democratic primary ballots and sent Vermont Sen. Bernie Sanders to victory with 1,728 votes, representing 56 percent of Democratic ballots cast. Massachusetts Sen. Elizabeth Warren was second with 765 (25 percent), and former Vice President Joe Biden received 560. While 3,407 voters cast Democratic ballots, 216 took Republican ballots with President Donald Trump receiving 149 votes to 61 for former Massachusetts Gov. William Weld. Rocky De La Fuente got six. Voters were feeling generous on city matters as well, approving every municipal, school, and agency spending request by large margins. Ericson Takes Council Seat There were two contested races on the ballot highlighted by a three-way competition for an open seat in District 3 for City Council. Jay Ericson, a key volunteer in the rebuild of the Union Elementary School playground, defeated Gene Leon and Bruce Sargent, 518–210–189, respectively. Ericson said he was eager to get to work on immediate issues before the Council, such as the drafting of a new Downtown Master Plan and how much to invest in the renovation of the Barre Street Recreation Center. “I’m humbled and grateful to all the voters of District 3 for all of their support,” Ericson said. I am thankful for Gene and Bruce for being willing to step in and be on the ballot and for being willing to give their time and energy to the city. I’m encouraged that they both will stay engaged in the process.” Ericson will join Daniel Richardson as new faces representing District 3. Richardson was appointed in December to replace Ashley Hill and was unopposed in winning the right to complete the last year remaining in Hill’s term. In the other contested race, Linda Berger defeated Andrew Penniman, 1,553–956, for a four-year seat on the Cemetery Commission. Incumbent Mayor Anne Watson scored 3,046 votes in an uncontested bid for a second term. Incumbent city councilors in District 1 Dona Bate (852 votes) and District 2 Conor Casey (974) were re-elected without opposition. “I’m grateful for the support of the voters in Montpelier,” Watson said. “Since I had no opponent, I knew I would win, but I was surprised and delighted to see that I broke 3,000 votes. I’m thankful for the opportunity to lead the council for another two years, and I’m looking forward to getting into the work!”
UNDERWRITING SUPPORT PROVIDED BY