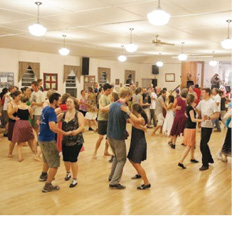 To the older eye, the hall at the Capital City Grange on Feb. 1 appeared to be full of men and women, dancing in long lines. But while traditional contra dance calling directs instructions to “gents” and “ladies”, caller Will Mentor seemed to be addressing birds as he called out dance moves: Larks: allemande left once and a half. With your partner, allemande right once and half. Ravens: allemande left once around. Contra dancing is an American form of line dancing with roots in English, Scottish, and French dances dating back centuries, and the Montpelier dance goes back decades. In January, the Grange’s dance joined the growing number of dances that have replaced the traditional terms “gents” and “ladies” with gender-neutral alternatives. While the vast majority of dancers are neutral or positive about the change, some feel uncomfortable and have even stopped coming. When you talk to individual dancers, it’s apparent that to view the dance hall as full of men and women is an oversimplification. Some dancers identify as gender-fluid or gender non-binary, and instructions to “ladies” or “gents” don’t feel right to them. As at the Grange, some contra dance organizers have substituted gender-free words that correspond to the dancer on the left or right side when a couple stands side by side, such as “larks” and “ravens” (or other l/r words, such as “lakes” and “rivers”). Amelia Schlossberg, 29, has danced contra their whole life; their parents met at a contra dance. (Schlossberg prefers the pronouns they and them.) They said they came from Burlington to the Feb. 1 dance in Montpelier because the gender-neutral calling appealed to them. “I’m non-binary, so for me, contra dancing has always taken a lot of mental energy, trying to ignore ‘men do this’ and ‘women do that.’ Whichever role I’m in, it takes a lot of energy to remember which one is me. With ‘larks’ and ‘ravens,’ it takes all the emotional stress out of it. I’m just contra dancing.” Stan Carlson, who started contra dancing in the 1980s, said the change was something that “had to be done” because of gender identity issues. He was quickly able to adjust to the new terms—mostly. “It just took me one dance, and I was basically understanding it. But every now and then my brain does things…” Still, he said, “It seems silly that words would have that much power.” Carlson usually dances the lark role, although he occasionally dances as a raven, “when there aren’t enough women around.” He is concerned that new dancers may find the bird terms confusing. “They are told to choose to be larks or ravens, and they have no idea what the ramifications are.” Dancers at the Grange took years to discuss the change to gender-neutral terms. In 2019, some dances were called with the traditional terms and some with gender-neutral terms. Members of the Contra Dance Umbrella (CDU), which organizes the Grange dances, surveyed dancers at three dances in March and April. The overwhelming majority of respondents either favored the switch or were neutral. Some said they opposed the switch, and of those, a handful said they would only attend dances called with “gents” and “ladies.” CDU member Emma Schoenberg, 27, acknowledged that some dancers have stopped coming. Schoenberg, who identifies as queer or bisexual, also said, “I have friends coming tonight who are coming because of ‘larks’ and ‘ravens.’” Mentor, the caller at the Feb. 1 dance, said, “As a caller, I want the dance organizers to tell me what to use. In a perfect world, the dancers have had conversations about what they want to hear, and I’ll just come in and use it. And I think what happened in Montpelier is exactly that. The community went through a process.” Mentor said he calls around 80 dances a year, in over 10 states, and around a quarter of the dances use gender-neutral terms. Gender-neutral dances tend to have more young people in them, he said, but he doesn’t know whether the use of gender-neutral terms attracts more young people, or whether younger dancers more rapidly made the switch. Another frequent caller at past Grange dances, Bill Olson, 73, played bass in the band on Feb. 2. He said he has called dances using various gender-neutral roles, but he’s not fully supportive of the change. “I understand why we’ve gone to this. But ‘ladies’ and ‘gents’ are traditional roles, and they’ve been good for several hundred years, and I don’t see any reason to change them. It’s just a role. We always used to dance the other role, without even thinking about it.” The Capital City Grange contra dances are held 8–11 pm on the first, third, and fifth Saturday (if there is one) of each month, with instruction for new dancers at 7:30. Mentor said, “Of all the dances I call at, Montpelier’s is one that stands out for both the technical skill of the dancers and their warm welcome to new dancers.” Schoenberg said she hoped dancers who left because they preferred traditional role names will return. “A great thing about contra dancing is that you can stay away for a year or five years and get right back into it, with many of the same people.” Carl Etnier started dancing in contra dances in the 1980s and has danced at the Capital City Grange since 1998. He dances the lark role, but when callers tell “larks” to do something, he still sometimes forgets they are talking about him.
UNDERWRITING SUPPORT PROVIDED BY