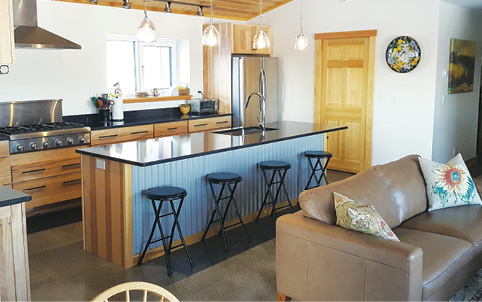 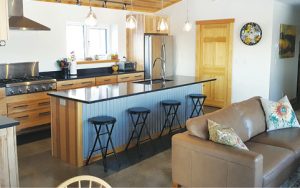 After spending 32 years in their Adamant log cabin home, Larry and Barbara Floersch knew the time had come to make some tough decisions.

“Our kids had moved out, and my dad, who had lived with us for a few years, had died, so now we had this big house we weren’t using,” Larry Floersch said. “Heating it was expensive in the winter.”

Floersch, a retired editor and IT specialist, and Barbara, a self-employed trainer and grants consultant, began pondering their future as aging Vermonters.

“Barbara decided, ‘I think we need to downsize’,” Floersch said.

The couple put their house on the market in spring of 2016 and it sold by midsummer. Still undecided about where next to call home, they moved into temporary housing and considered their options. They looked at multiple properties, but none felt quite right, Floersch said.

“In the back of my mind I always had this desire to build my own house,” Floersch said. “So Barbara said, ‘Let’s see if we can do that.’”

After finding a 5.7-acre lot for sale in Berlin, Floersch said the couple’s future started coming into focus.

“We liked the view and the location, and when we got it for a price that fit our budget, it was almost like it was foreordained,” he recalled. “We thought, by golly, the chips are falling into place here.”

The couple reached out to contractor Malcolm Gray of Montpelier Construction, a certified passive house consultant they had hired years earlier to build an addition to their Adamant home.

“The addition Malcolm built was the best part of the Adamant house,” Floersch said. “It was as tight as a drum, it was energy efficient, and it really was beautiful.”

Gray worked with the couple to conceptualize plans for their new home. The custom design included energy-efficient systems and a modern floor plan that allowed for aging in place.

“They wanted a house where they could retire and live comfortably for quite a while, and part of that is making a house that’s energy efficient, sustainable, and low maintenance,” Gray said. “So we pulled those things together and enrolled in the High Performance Homes program with Efficiency Vermont, which also gave them some monetary incentive.”

Designing their own home also allowed the Floersches to plan for what they might need in the years ahead.

“When my elderly dad lived with us, we had to retrofit certain things to make sure he was safe,” Floersch said. “He had to have a step-in shower and grab bars. So we said, well, we’re getting older too, let’s build a house that we can live in for as long as possible.”

The pair decided on a three-bedroom, two-bathroom layout, “which isn’t bad for only 1350 square feet,” Floersch said.

By installing an energy-efficient, whole-house ventilation system, the couple avoided the high costs of heating and air conditioning.

“Basically, they have a home that barely has a heating system,” Gray said. “We have a single-head air-source heat pump to heat the entire home, and we use whole house ventilation to distribute the heat into the three bedrooms and two bathrooms,” he explained.

Temperature regulation is also aided by the home’s energy-efficient, concrete floors, polished to a decorative finish Gray described as “salt and pepper.”

“The floor is part of the whole system for heating and cooling the house,” Floersch said. “It’s an eight-inch thick concrete slab sitting on six inches of blue board insulation. So when this floor is at 68 degrees, it’s going to stay at 68 degrees for a long time, even if the ventilation system fails.”

The house also features large, triple-glazed, insulating windows to allow in sunlight and keep the cold air out.

“The windows and [glass] doors are exceptionally high performance,” Floersch said. “They have the same R-value as a 2 x 4 insulated stud wall.”

Along with saving money, the couple sought to improve upon design flaws they struggled with in their former home—starting with the kitchen.

“It was always my belief that the kitchen is the center of the house,” Floersch, an avid home chef, said. “I wanted the kitchen to be part of the living space because in our Adamant house it was a separate room. And [guests] were always complaining, ‘You’re always in here cooking and we never get to talk to you.’”

“We designed an open common space with the bedrooms and bathrooms tucked in, and with the cathedral ceiling you get a nice sense of openness,” Gray said.

The home’s master bathroom was designed with efficiency, comfort—and aging— in mind.

“We installed grab bars and a lipless walk-in shower with a wide entrance, so you can roll in if you had to be in a wheelchair,” Floersch said.

Shower controls are accessible from outside of the stall for easier temperature control, and built-in nooks by the sink store electric toothbrushes and a water pic.

“It’s a little bit like living on a sailboat,” Floersch said. “There’s a place for everything, and everything has to be in its place, because that’s the only way it works.”

Ultimately, the couple opted for a few traditional technologies, such as propane gas for hot water and cooking.

“I love to cook on gas, like in a restaurant, so I wanted a propane stove,” Floersch said.

They also decided to pass on solar roof panels.

“One of the issues with a solar system is that you’re financing these things over 12 years, and we’re getting old,” he explained. “It was going to be an investment, and financially it didn’t seem like it was going to pan out for us.”

Although the house does not qualify as passive, it earned a High Performance rating from Efficiency Vermont, which issued the couple a rebate check.

Gray said the benefits of a High Performance home go beyond financial savings and helping to promote a cleaner environment.

“It’s about creating standards of comfort as opposed to looking at comfort as an accommodation for a disability,” Gray said. “The more we build homes that are easy to live and grow old in, the better it is for everybody.”

An Afternoon with the Vermont Youth Documentary Lab