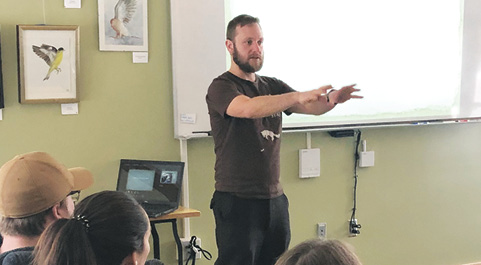 “So here’s the thing about tracking. Tracking is about reaching levels of awareness and knowing what to look for. Sometimes it’s about following fine details, and other times it’s pretty apparent.” I’m standing outside of the North Branch Nature Center listening to biologist Dave Muska, instructor for the Introduction to Wildlife Tracking workshop, expound the Tao of track identification. He is laser-focused on a trail of small, round impressions in the snow—prints I didn’t notice were there until he pointed them out. Muska began working as an educator at North Branch Nature Center two years ago, where, along with workshops on tracking, he teaches foraging skills, mushroom identification, and how to harvest and cook wild plants. “When we look at prints, we have to ask the question, who’s here?” Muska said. “We also have to ask, how many toes does it have? What’s the overall shape of the foot? What’s the stride length?” Tracking involves asking what Muska calls “the five big questions”: who, what, when, where, and why. “They’re foundational questions in storytelling, and it’s the same in tracking,” Muska said. “What was it doing here? Why was it moving around under this tree?” Muska grew up in New York with regular access to wild spaces. His early experiences playing outdoors and swimming in the Susquehanna River instilled in him a love for the natural world. “I had the freedom to be myself, outdoors,” Muska recalled. “When I was in the forest, I was part of the forest.” He studied biology at the College of Environmental College and Forestry, and graduated in the mid-aughts. After several years working “random jobs” in biology, he returned to the wilderness he loved. “I started working with wilderness living skills groups, survival groups, though I don’t like the term ‘survival,’” he said. I asked him how he felt about game hunting; a topic of growing controversy in Vermont. “I think hunting for food is appropriate,” he said. “Hunting is a game management tool. A lot of it has to do with the fact that the major predators are absent, so humans are the predators.” Besides, Muska said, life for most animals in the wild is much like Thomas Hobbes might describe it: nasty, brutish, and short. “When animals take other animals for food, it’s not pleasant,” Muska explained. “It’s not often a very clean kill, and it’s—I imagine—pretty traumatic to be on the receiving end of that.” A “good, ethical hunter” can ease the animal into death quickly, he said.  “This is interesting, there’s a toe drag right there,” Muska said, turning his attention back to the unidentified tracks. “That can indicate speed. It looks like this animal started to go quicker through here.” I asked if the prints could belong to a raccoon. Muska said no, the toes weren’t long enough. “Raccoon feet really look like hands,” Muska said. “It’s a striped skunk.” The tracks continued across the grounds and led to the compost bin. “Well, there’s the food source,” he said. At the bin were a second set of prints belonging to a much bigger animal. “You can see here we have a very excited dog that ran up and then took off,” Muska said. “It slipped on the ice, and made a quick break. And there are the skunk prints next to it.” Was the skunk chased by the dog? I asked. “So, now we’re into the when,” Muska said. “When did these prints happen, and did they happen together?” He crouched down to examine the prints more closely. The skunk tracks revealed a thin layer of undisturbed snow, while the dog’s did not. “The dog happened more recently,” Muska said. “The skunk happened early this morning, and the dog was here maybe an hour or two ago.” Piecing together fragments of a wild animal’s experience is part of the magic of tracking, Muska said. “Interpreting [tracks] is really the most fun for me, because I can imagine what the animal is doing,” he said. “Recently, I was following some red fox prints and came to a spot in the forest where it kind of rolled around in the snow, just playfully rolling.” “We forget that wild animals play and hop around and jump when they feel good,” he said. Spending time in wild spaces is an integral part of feeling good for humans, too, Muska said. “Spending time outdoors should be one of the psychological categories for health,” he said. “We need to have access to the natural world. We need to interact with it and be part of it.” Muska said his philosophy was ossified by an experience he had several years ago while working as a biologist in the Mojave desert. As he watched “huge excavators” lay pipeline in desert tortoise habitat, he vowed to spend his life “teaching and sharing avenues where people can get close to the natural world,” he said. “When we have a relationship with the natural world, we innately respect it and want to protect it,” Muska said. “My mission is to give people places where they connect with nature, so it’s not some intellectual jump they have to make to see that taking down a forest is bad. “What’s great about nature, is it’s always here for us,” Muska said. “You just have to go stand under a tree, take a few deep breaths, and there you are.” For information on wildlife tracking workshops and other upcoming events at the North Branch Nature Center, visit northbranchnaturecenter.org For information about a variety of wilderness and outdoor adventure classes offered by Dave Muska, visit ondatraadventures.com.
UNDERWRITING SUPPORT PROVIDED BY