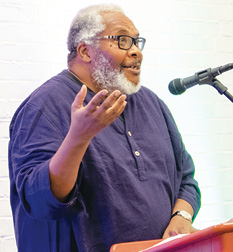 In his new book, Scattered Clouds, poet Reuben Jackson reflects on his complicated love affair with the state he can’t quit.

“The first thing I would say about Vermont to people who have never been here is that the state is a small town,” says Reuben Jackson. We are sitting at a cafe table in the empty cafeteria of the Days Inn hotel in Williston, where I’ve come to interview Jackson before his book event at Saint Michael’s College later that night. The hotel clerk suggested the cafeteria as the quietest room in the lobby, but the loud, steady hum of an industrial-size kitchen freezer seems determined to prove her wrong.

“Technically, I would put Reuben Jackson on par with William Carlos Williams for his ability to pack so much emotion and tension into a single word, image, or phrase,” said Abdul Ali, two-time recipient of the D.C. Commission on the Arts and Humanities’ Literature fellowship and professor at Howard University. “He splits open wide so much that masculinity tells us not to divulge: depression, health complications, heartbreak, awkwardness.”

Jackson is a familiar and beloved figure in Vermont; an erudite, artistic teddy bear of a man, with a short, white afro and matching beard framing a kind, open face. When I ask him how he came to be “Vermont famous,” he orbits around the question without really answering. I soon realize it’s because he doesn’t fully understand it himself.

Born and raised in D.C., Jackson described his teenage self as a “wallflower,” who applied to Goddard College after seeing an ad for the school in the Saturday Review.

“I had gotten the writing bug in 10th grade, and I wanted to pursue it,” Jackson said. His mother, a language arts teacher, convinced his father to allow young Reuben to attend the “alternative” Vermont school.

“My father’s concern was, ‘You’re not going to find a job,’” Jackson recalled. “He said, ‘You’re not coming back home to live with some damn poetry degree.’”

But Jackson secretly wanted more from Vermont than to see the inside of a lecture hall.

“I’d seen all these postcards where there were, like, green pastures, and gazebos, and I thought, ‘wouldn’t that be wonderful?’” Jackson recalled. “Of course, being a black kid in D.C., I couldn’t tell my friends that, so I was kind of a closet pastoralist.”

But when he arrived in the dead of a February night to begin his first semester at Goddard, reality hit him like a cold smack in the face.

“I got off the train and it was like 20 below windchill,” Jackson said. “So there’s the romanticism and then, boom, you step out of the locker room onto the field and suddenly it’s a whole different thing.”

“The postcards don’t give you hypothermia,” he said.

Jackson’s fantasies of Vermont also didn’t include the stunned expressions he noticed on the faces of white Vermonters as he explored his new college town.

“I’d walk into a store and people would just stare,” Jackson said. “I’m only 18, and it made me realize that whether you wanted to or not, you were representing your race. Just four years past acne and you’re thrown into this role.”

But within the rarefied academic cocoon of Goddard, Jackson said he thrived.

“At Goddard I started [hosting] radio shows and meeting fellow literature lovers, and it was really the right place for me,” he said. “I loved it so much.”

As graduation loomed closer, he searched for a way to avoid returning to D.C. so he could remain among the artistic, intellectually curious friends he’d grown to love.

“I had these romantic visions of being a poet, wearing a tweed jacket, smoking a pipe,” Jackson said. “Looking over the hills going, ‘Oh, that’s Spruce Mountain, I think I’ll write an ode to it.’ You know, that corny guy was always in me. And being at Goddard, I was able to swing that bat.”

He asked his mother for a loan so he could stay in Vermont and look for a job. He wanted to work at Bear Pond Books in Montpelier, he said.

“When my mother didn’t like something, I called it the Great Silence, where she just kind of sat there,” Jackson recalled. “And she looked at me, and she said, ‘Do you know how much your college education cost?’”

Crestfallen, Jackson returned to D.C. and tried to move on. He earned a master’s degree in library science from the University of the District of Columbia, and became the children’s librarian for the District of Columbia Public Library. Next came a career position as archivist and curator for the Ellington Collection at the Smithsonian Museum of American History, where he would spend the next twenty years.

But like the lover who got away, he was haunted by the thought that his true destiny still waited on some less traveled, picturesque Vermont road.

“That heartbreak never disappeared,” Jackson said. “Just like any loss, you have a hole and you keep going with the knowledge that the hole is there. But I had unfinished business.”

Armed with a teacher’s certificate and “fantasies of sitting by Lake Champlain writing odes,” Jackson moved back to Vermont in 2011 to teach at Burlington High School.

“I’m still sifting through that [experience] I think,” he said quietly. Jackson described a climate where the school’s efforts to “diversify” the teacher populace sparked political and racial tensions he felt ill-equipped to navigate.

“There was—I hate this term—controversy when I was teaching at Burlington High School because of the constant struggle to recruit and retain teachers of color, and how those things bump up against the idealistic myth of Vermont.”

That myth is just one of the “quixotic ready-mades” about the state, Jackson said, which is that “little, if any, institutionalized racism exists here.”

He left Burlington High in 2013, and continued his weekly VPR show, Friday Night Jazz. But with the loss of his teaching job and few prospects for full-time work, Jackson found himself saying goodbye to Vermont once again.

I ask Jackson if, within the disappointment, he finally found closure for his tortured romance with Vermont. Did the less-than-idyllic reality he experienced allow him to put away those faded postcards once and for all?

“I wish I could say I never think about moving back, but my romanticism has always been the bane of my existence,” he says, grinning. “Vermont isn’t done with me yet.”

Reuben Jackson’s book Scattered Clouds is available on Amazon.com and at local bookstores.