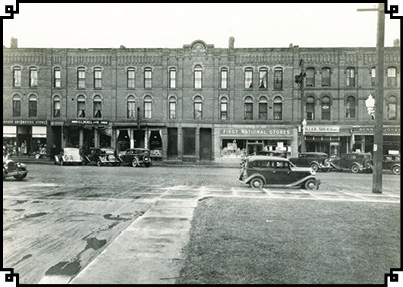 The French Block, the longest block in downtown Montpelier, was constructed after the great fires of 1875 that destroyed buildings on Main, State, and Barre streets. The block, designed by Montpelier architect and Mayor George Guernsey and seen here in a ca. 1930 photograph, always featured stores on the first floor and residences on the top two floors.

The storefront where First National Stores was located was for many years occupied by Somer’s Hardware, which retained the same doors. The central entrance to the building was absorbed many years ago by the retail space now occupied by Aubuchon’s.