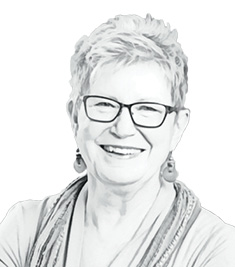 Editor’s note: Welcome to “The Way I See It,” a personal opinion column that will appear in each issue of The Bridge, starting with this first issue of 2020. We are inaugurating this initiative with six local writers whose columns will rotate throughout the year: Anjali Budreski, Rickey Gard Diamond, Robbie Harold, Bernie Lambek, Andrew Nemethy, and John R. Turner. Columns will cover a range of topics near and dear to the hearts of the writers, and will not necessarily reflect the views of The Bridge. We expect that these pieces will be informative, inspiring, and thought-provoking, and look forward to bringing these musings to you each issue.By Rickey Gard Diamond

Political times like these can feel like driving a winding mountain road at a high elevation—and since the surprise of a U.S. assassination of an Iranian general first thing in 2020, this mountain metaphor requires exploding IEDs at the roadside. It is better to lighten a white-knuckled grip on your steering wheel in such situations and raise your sights to take the long view, but that’s easier said than done.

Over the holidays, whenever a distant relative or a new acquaintance expressed support for the greatest president of the United States ever and the best economy ever known to man—my first tight-fisted question was: What the??!! This isn’t especially wise. My closest relatives and most of my neighbors are fellow Americans. And so, I know I’d be wiser to take a deep breath, gaze toward our mutual destiny of being stuck with one another, and be more flexible, not frozen in stiff silence.

I might ask something a bit more open-ended of my neighbor or cousin twice removed. How interesting, I might comment, loosening my grasp. What exactly seems the greatest to you? What traits and practices do you most admire? Impulsive foreign policy decisions putting Kurds and Americans in Iraq at risk? And talking about economics, do tell: how great exactly was your pay raise and tax cut this year? I’d really love to know your specifics.

Here in Vermont, even our Republican governor thought it only right in 2019 that an impeachment inquiry of our present president is launched. Suddenly the conversation has dramatically changed. Polls tell us that Americans are nearly evenly divided between parties—between tossing the bum out or defending him against yet another witch hunt hoax. Now I suppose many will praise him as fearless and bold.

He wants to de-escalate. He likes peace. This is why I sometimes tune into Fox News and Laura Ingraham to try to better understand. Admittedly, it drives me very close to the edge of my personal precipice and usually results in next tuning into the Home & Garden channel, to reconsider repainting the kitchen, a thing I can control. War is peace. I’ve heard this before. Impeachment is old news now, and in 2020 I’m in a George Orwell novel, driving a crumbling, less stable mountain road.

There are those who will call me a snowflake. In 2019, I complained too much about brown children being caged, about the NRA’s overlarge influence on shot-up schools, churches, and synagogues, and thought a Justice Department boss was a bit too loose with claims of Obama’s FBI spying against those law-and-order Republican campaigners. Yes, I suspect the so-called intelligence “community,” too, given their history of deep state black ops post-9/11 and Guantanamo, and now their reports of “imminent threats” in Iraq we can’t talk about, but which make assassinations necessary.

Calling me a snowflake doesn’t hurt. Along with that famous Vermonter, Snowflake Bentley, with his pioneering microscope and camera, I see no wrong in loving snowflakes’ floaty insistence on the power of universal gravity, no matter who you freaking are. He taught us that you’ll find beauty and individuality when you peer close enough at each one.

I remain idiotically hopeful that enough Americans will soon remember who we are, and who the earth needs us to be. We snowflakes are becoming a rarer phenomenon even in Vermont.

No snow is bad for the economy when you count on out-of-state skiers for a living. So, I will trust in our farmers, whose patience and philosophy says death happens at the root of our compost and sustenance. And I will trust in the drift of my fellow Vermont snowflakes.

Still, cold and snow can be no assurance that our treacherous drive with a truckload of democracy, and a few bungee ties threatening to come undone, will be any safer while traveling on a winding mountain road, way up toward a very narrow pass just ahead.

Rickey Gard Diamond is a columnist at Ms. Magazine and editor/co-publisher at Rootstock Publishing. Her most recent book, Screwnomics: How the Economy Works Against Women and Real Ways to Make Lasting Change is a 2019 Independent Book Publishers award-winner and, along with her fiction, Second Sight: A Novel and Whole Worlds Could Pass Away: Collected Stories, is widely available at bookstores and online. She lives and writes in Montpelier.

State of Mind: The Rubber Meets the Road