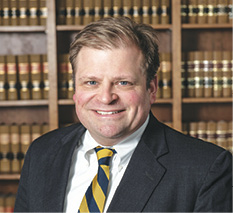 Daniel Richardson, a long-time Montpelier resident and current chair of the Montpelier Development Review Board announced in a news release that he will run for one of the two open seats in District 3 on the Montpelier City Council. Richardson, a 20-year Montpelier resident, expressed his desire to step up for the City at a critical junction. “As a city, we need to focus on the quality-of-life issues that will continue to support the residents of the City and to make improvements that will entice new residents to make their home here, while being sensitive to our present tax burdens.” Richardson, an attorney in private practice in Montpelier, noted that his background in municipal law and policy would bring a new and needed set of skills to the Council. “I have represented municipalities throughout my career and have become familiar with the wide variety of tools and ideas that a city can tap when faced with a problem, whether that be a need for funding, addressing traffic and other safety issues, or encouraging smart growth.” Richardson said he has seen what happens when good planning and public deliberation are missing. “Municipalities, like Montpelier, have limited resources and powers. If process and planning are ignored, it is a recipe for dissension or worse—a go-it-alone attitude that can end up overburdening taxpayers. As a City Councilor, I seek to bring my experiences to the benefit of our City to bring ideas but also to ensure that there is a process to examine such proposals in a thoughtful, productive, and fair manner.” In addition to his law practice, Richardson served as an adjunct professor at Vermont Law School, where he taught municipal law. He has also lectured on municipal issues to professional groups throughout the state. Richardson has lived in Montpelier’s District 3 since 2000. “It is where my wife and I got married and bought our house. It is where our two kids were born and are being raised and educated in our local schools. It is where I have located my practice, which as it has grown has created additional local jobs. It feels like a lot of living for just one district, but it shows what we want for this City, for young people to come, to join our community, and to flourish over time.” Richardson first served on the Montpelier Development Review Board in 2007 and has been Chair since 2018. He currently serves as a member of the Main Street Middle School Building Committee. Richardson also served on the Design Review Committee from 2005 to 2007 and as a Green Mount Cemetery Commissioner from 2007 to 2013. Richardson was President of the Vermont Bar Association in 2014 to 2015 and President of the Vermont Bar Foundation from 2016 to 2017. He is currently on the Board of the Green Mountain Council, BSA, where he volunteers as a merit badge counselor. The deadline to submit the 25 signatures required to appear on the Town Meeting Day ballot is January 27.
UNDERWRITING SUPPORT PROVIDED BY