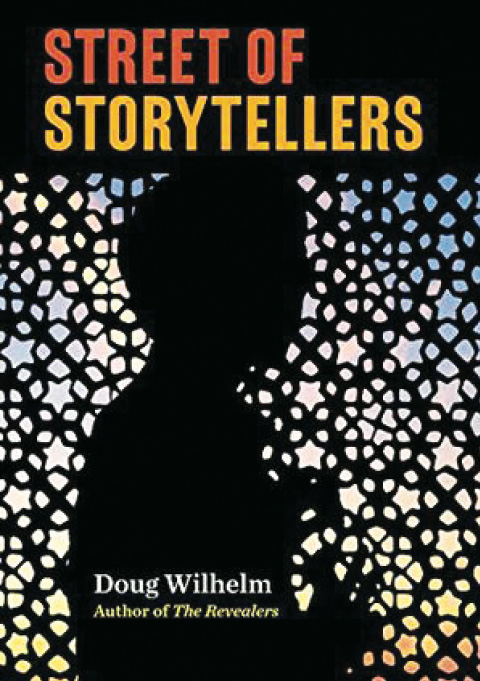 Wilhelm Book Explores Teen Angst in ‘80s Pakistan By Bernie Lambek Doug Wilhelm is an author who presently lives in Weybridge, Vermont. He used to live around Montpelier, and we’d often see him walking about town, a head taller than the crowd. Wilhelm writes young-adult novels about adolescent boys in a bind who use their wits to get through. Most famously, he wrote The Revealers, which tells the story of a middle school kid who figures out a way to confront the bullies in his school. According to Wilhelm’s website, The Revealers “has been used by over 1,000 schools to open up discussion and new understanding of bullying in adolescence.” The Prince of Denial is an equally good story of a teen who has been hiding the fact of his father’s alcoholism. Wilhelm has now written a new novel in this genre, called Street of Storytellers (Rootstock Publishing 2019). Same genre, yes—an American 15-year-old with family problems—but it moves way beyond the scope of his earlier work. The setting is Peshawar, Pakistan, in the 1980s. The young protagonist and narrator, Luke, must first confront his “Western” problems—his parents are divorced and his father is obsessively devoted to his own work at his son’s expense. But Luke also finds himself in the midst of cultural upheaval in Pakistan and he must choose his loyalties, with devastating consequences if he misses. Luke’s father, a historian, is studying the ancient Gandhara ruins and relics scattered around this frontier region that borders Afghanistan. He has brought Luke, against Luke’s wishes, with him to Peshawar for this visit. The father’s colleague is a Pakistani professor with a son, Rashi, who has fallen under the sway of jihadist radicals, and a daughter, Dani, who must remain publicly submissive according to the customs of their Pashtun society but, within the home, is prone to making acerbic comments about her brother’s extremism. When Luke and his father visit their home, she tells them, “My brother thinks he can live in the past.” Rashi, furious, exclaims, “It’s not the past—it’s our future.” Dani replies, “You see, he’s confused. He thinks we can live as if we’re in some desert in Arabia, fourteen centuries ago.” To add to Luke’s confusion during his stay in Peshawar, he develops a heart-aching crush on Dani, but they are forbidden by Pashtun custom to touch or even to converse unsupervised. Luke also befriends Yusuf, who works for the hotel where Luke and his dad reside. Yusuf takes Luke into the Old City, and Wilhelm’s prose brings it to life: “Yusuf led us past carts of orange and banana sellers, past wide pans where men simmered meat in popping oil, by rickety stalls where peddlers had made piles of random-seeming things—shoe polish, sunglasses, baby formula, plastic flowers. A man had a pole slung across his shoulders, and from each end hung a wire cage filled with parrots.” Rashi and his friends demand Luke’s allegiance to their mission before Luke even knows what it is. He is astonished when he finds out. “It is God’s will,” Rashi explains. Luke: “How do you know that?” Rashi: “Because our holy book tells me.” On the other side, Luke is pulled emotionally toward Dani’s warm humanity and Yusuf’s Sufi friends and their music. Dani tells Luke: “I love my faith—Islam teaches us to be tolerant, give to the poor, be generous with guests…This is my religion, not men who want to lock women away and then say we must be protected. That is not religion! That is boys scared of girls.” Similarly, Yusuf’s friend worries about the fundamentalist Wahhabis: “They start bringing young guys from other countries, to be jihadis. Fine, fine—but now they are telling us that everyone here must be perfect Muslims. We must be pure. And they are saying what this means.” Luke must choose. It is the choice we humans face worldwide. Do we accept authoritarianism, the voice of the despot, of scripture, of the cult leader, the one who says “I alone can fix it”? Or do we have the wisdom and the freedom to follow a path that takes its values from the Enlightenment and a cosmopolitan world-view? This alternative demands that we seek truths through the exercise of reason based on evidence and that we cherish the rights and dignity of all humans, including those outside our tribe. Wilhelm and his young hero Luke know which choice to make.
UNDERWRITING SUPPORT PROVIDED BY