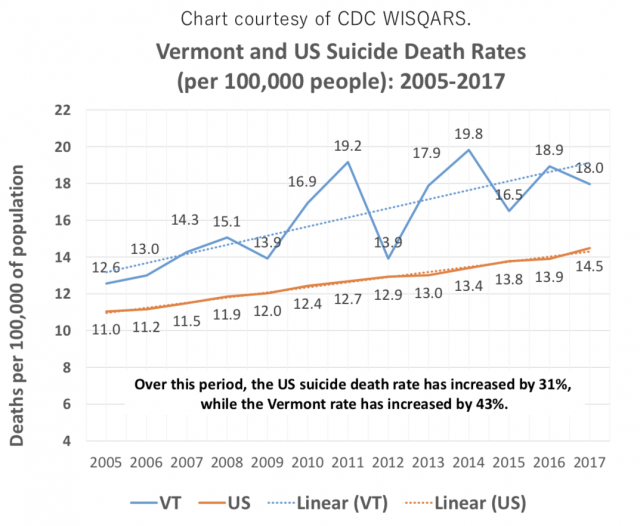 Vermont has a suicide problem, andpeople don’t like to talk about it. Suicide is the eighth-leading cause of death in Vermont, with 112 reported in 2017, according to the Centers for Disease Control and Prevention. That’s roughly twice the number of people who die on the state’s roads annually, and the actual number is probably higher. Researcher Tom Delaney, who studies suicide statistics at the University of Vermont, said some deaths by overdose, single-car crashes with a single occupant, or some police shootings might be suicides but are not counted as such.

Suicide rates in the country as a whole increased by 31 percent from 2005 to 2017, but Vermont’s rate increased faster, at 43 percent. Delaney said Vermont has a lot of factors that correlate with higher suicide rates. “Every person who dies by suicide is unique,” he acknowledged. “While I wouldn’t say they are causal at all, there are things in Vermont that are associated with higher rates of suicide.” Some of those associations with suicide seem intuitive: Vermont has high rates of binge drinking and gun ownership. Perhaps surprisingly, rural living—and especially rural poverty—is also associated with more suicides; an apparent bucolic idyll can be saturated with loneliness, with long distances to other people making social connection difficult. Vermont’s status as one of the most white-haired states makes it vulnerable to higher suicide rates, too. “You get this spike in suicide rates in people’s 50s, 60s, and 70s. That’s when most Vermonters die of suicide,” said Delaney. Men do so far more than women, he adds. “Females over age 50 have about one-fifth the odds of dying by suicide as males.” Vermont’s Zero Suicide initiative, led by the Vermont Suicide Prevention Center at the Center for Health and Learning in Brattleboro, is an attempt to break the state’s upward trend in suicides. Pilot studies in Franklin, Grand Isle, and Chittenden counties wrapped up this spring, according to Alison Krompf at the Vermont Department of Mental Health, and those lessons are scheduled to be presented to the Legislature in January. The report isn’t public yet, but Krompf said one key need that was identified is for better training for skilled workers in 10 “designated agencies” around the state— Washington County Mental Health Services (WCMHS) and its nine sister organizations. “Our providers out there were not confident in treating someone who is suicidal, and those who went through the training are now confident in treating someone who is suicidal. We know that works, and we know we want to expand on that.” Even the best training for mental health workers only helps a small fraction of suicidal people, according to Krompf. “Only about 20 percent of those who die by suicide in Vermont were in our designated agency system,” she said. So another recommendation is to train primary care providers and emergency room personnel in identifying and helping those at risk of taking their lives. Just as many healthcare providers now routinely ask patients about seat belt use and alcohol consumption, a goal of Zero Suicide is that additional questions will identify people contemplating suicide. But identifying people at risk isn’t enough. “We, as a system, need to provide what the next step is if someone answers yes to those questions,” said Karen Kurrle of WCMHS. “Talking about suicide is still very stigmatized. I wish we, as a society, could talk about mental health care in the same way we talk about physical health care.” Some local organizations, such as the Montpelier Senior Activity Center, have been through “mental health first aid” training. “It’s like CPR, for everybody, for mental health,” said Krompf, who used to work as a mental health first aid trainer in St. Albans. A key part of the training is to practice asking the question: “Have you been thinking of killing yourself?” “People dance around it,” Krompf added. “If you’re afraid to ask, people will be afraid to tell you.” But it’s not helpful when just asked out of the blue, either. “Pair it with reflecting back what you heard. People need to first hear that you actually listened to what they said, before they think you snap to judgment that they might be suicidal.” If the answer is yes, ask whether the person has a plan and the means to do it— they’ve stockpiled pills for an overdose, for example. A person with both is at high risk of imminent suicide. In mental health first aid training, Krompf said, people “are trained to listen non-judgmentally, sit with the person, educate them on their options, and stay with them until they can get help.” Come January, it will be up to the Legislature to decide whether to fund Zero Suicide throughout the state. The Legislature will also face a decision about how to proceed on S.169, a bill that would create a 24-hour “cooling off period” for handgun sales, to reduce impulse purchases that lead to homicides and suicides. The bill, originally setting a 48-hour period, passed the House and the Senate but was vetoed by Gov. Phil Scott after the Legislature adjourned. While Democratic leadership condemned the veto, the votes to pass S.169 were not sufficient to override it. Delaney, the UVM researcher, said suicide attempts by gun are far more deadly than by other means. “It’s a myth that people who really want to take their life will do it no matter what. Over 90 percent of the people who ever tried to take their life by suicide didn’t die by suicide.” However, when people try to take their lives with guns, he said, “death rates are over 80 or 85 percent.” Access to guns then becomes part of the issue. While Kurrle emphasizes she has no public opinion on gun legislation, she does believe “Anything that buys time, where a person is alive and I can be engaging with them, is something I want. Guns don’t help buy me time.”
UNDERWRITING SUPPORT PROVIDED BY