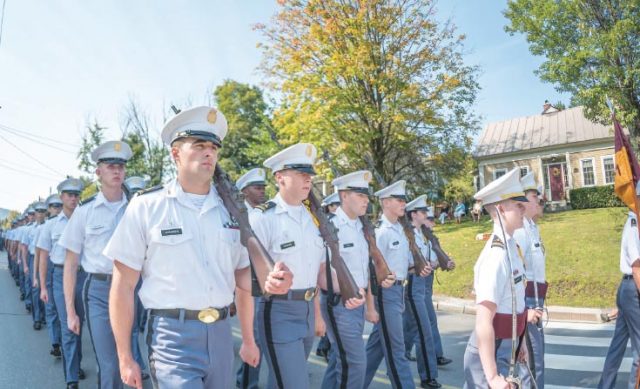 Anyone who is expecting guests for the weekend of September 19–22 had better pull out the air mattresses because lodging in Central Vermont is sold out. Hotels from Montpelier to Berlin to the Mad River Valley will be full of Norwich University alumni from around the world, all coming to celebrate the 200th birthday of the nation’s only private militarycollege.

University officials expect more than 6,000 visitors for the annual Homecoming Weekend activities, nearly three times the usual alumni turnout and doubling the population of Northfield (listed at 6,207 in the 2010 U.S. Census). Class participation is expected to span at least 80 years, officials said, with many World War II-era alumni waiting for the bicentennial to attend what might be their final Homecoming.

The bicentennial celebration has been five years in the making and coincides with the school’s Forging the Future fundraising drive that has netted more than $100 million for new construction, renovation, academic programs, and investments to increase financial aid for students.

Alumni who haven’t visited campus for awhile might not recognize the place. The university has spent about $66 million in the past five years on construction and renovation projects that impacted about 40 percent of the campus.

The centerpiece is the $24-million Mack Hall, opened in September 2018, which houses a performing arts center and the university’s growing business and management, computer science, and cybersecurity academic programs. Another $25 million went to renovations of Webb, Dewey, and Ainsworth halls and $8.5 million went to renovate Kreitzberg Library; install a 78-step Bicentennial Staircase near the Sullivan Museum and History Center to commemorate key donors, trustees, and students; and to re-landscape the upper parade ground. The campaign was designed to bolster Norwich’s position in the increasingly competitive student marketplace and to provide a solid foundation for the school’s next president, said Diane Scolaro, associate vice president for alumni relations and bicentennial celebrations. Dr. Richard Schneider, who took over as president in 1992 and helped grow the school’s endowment from $8 million to about $220 million, is stepping down this year. After a nationwide search, Norwich’s 24th president is expected to be named in January, Scolaro said. “That has all been made possible primarily by our alumni,” she said of the recent growth spurt. “Homecoming is a chance to recognize and honor our donors, and it’s a chance to showcase our students and our academics. After all the planning, this is our big wahoo!”

No Room at the Inns

Homecoming Weekend at Norwich always fills area hotel rooms, but this year’s events have extended the reach. Capitol Plaza in Montpelier and the Comfort Inn & Suites at Maplewood in Berlin are booked, as are most accommodations in the Mad River Valley, including all of the properties at Sugarbush Resort. Rooms were also blocked out at hotels in Waterbury, Barre, and Stowe. A quick scan of the internet shows a few rooms available
that weekend in Burlington, at about $400 a night.“We’ve been sold out for two years,” said Fred Bashara, a Norwich graduate and owner of Capitol Plaza Hotel and Conference Center in Montpelier, which will also host alumni banquets during the weekend. So many visitors in the area should also provide a boost for local restaurants, stores, and attractions. Montpelier is getting in the swing with Norwich bicentennial banners mounted on downtown lamp posts. “Norwich has really tried to connect with downtown in the past few years,” said Dan Groberg, executive director of MontpelierAlive.

So many visitors also means traffic. Scolaro said the university has plans to direct traffic to satellite parking areas along the north and south entrances to Northfield on the key days of Friday and Saturday, September 20 and 21. While most of the on-campus events are strictly for alumni and students, a huge fireworks display on Friday night and a football game Saturday between Norwich and Coast Guard (aka the Little Army-Navy Game) are open to the public.

There will also be a public ceremony at 4 pm on Thursday, September 19, to unveil the 78 stairs and 78 names on the Bicentennial Staircase, which leads from the museum to the upper parade ground.

Founded in 1819 by Vermonter Alden Partridge in the town of Norwich, the university is the nation’s 40th-oldest and owes its longevity to its unique military training and ability to meet the changing demands of a growing country, Scolaro said.

When an 1866 fire destroyed the college’s main barracks in Norwich, a team of Northfield town fathers rode there on horseback to offer the school 14 acres of land for relocation. The rest, as they say, is history, which is comprehensively recorded
in a new book by historian Alex Kershaw.

The book, Citizens & Soldiers: The First 200 Years of Norwich University, was recently released to coincide with the bicentennial. “Partridge created the first school in the country that taught agriculture, because we needed people to know how to farm,” Scolaro said. “And we were the second college in the nation (in 1836) to offer a degree in civil engineering as the economy expanded and the transcontinental railroad was built. Now we’re helping to build cybersecurity. This school’s leaders have done a good job of adapting to create programs that help students get jobs.” This year’s undergraduate enrollment is about 2,400 students, with about two thirds of those in the Corps of Cadets and the rest civilians, according to Daphne Larkin of the Communications office. The first-year Class of 2023 included 764 students, 465 of whom are “rooks” in the Corps of Cadets.

The closing of three Vermont colleges this year has cast the spotlight on the future of small, private institutions but Norwich leaders are bullish on the future. “Norwich has found its niche to keep people coming here,” Scolaro said. “You can get an education at 3,500 other colleges and universities in the nation, but there are very few that offer the kind of programs that Norwich does.”

Homecoming is a short trip for many Norwich alumni who came to Vermont and never left. Many went on to serve their communities as business leaders, entrepreneurs, and political figures.
Fred Bashara, whose family owns the Capitol Plaza Hotel and the Capitol and Paramount theaters, found not only a sense of purpose at Norwich but love as well. As a student in the Class of 1963 he met his wife, Mary, at the old Twin City Drive-In, and the couple married in the summer before his senior year.
Bashara said he ranked last in a class of 23 in high school in Lenox, Massachusetts and had no intention of going to college. “I really didn’t know what I wanted to do,” he said. School officials told him he had little chance of being accepted in college because of poor grades, but his mother insisted that he try. He applied to Boston College and was told maybe, if you attend two years of junior college. He heard about a 30- day summer school program at Norwich and wound up being accepted.
“That school changed my life,” said Bashara, who remains active in alumni
affairs. “The motto ‘I will try’ has stayed with me throughout life. The military gets you doing things, taking command, and that applies in all aspects of life.”
Al Gobeille came to Norwich from Rhode Island and has left a significant mark on the state. The Burlington restaurateur served as the state Secretary of Human Services under Gov. Phil Scott and was a former chair of the Green Mountain Care Board, which oversees hospital spending. He now works for the UVM Health Network.
At least three former Central Vermont lawmakers attended Norwich. Francis Brooks served Montpelier and Washington County as a state representative and state senator; Paul Poirier was a state representative from Barre; and the late Leo Valliere also served as a Barre City lawmaker. Matthew Romei, chief of the State House Capitol Police; and Arne McMullen, who is director of Montpelier Parks and Recreation, also attended Norwich. This doesn’t include hundreds of Vermont- born alumni who stayed around. — Tom Brown 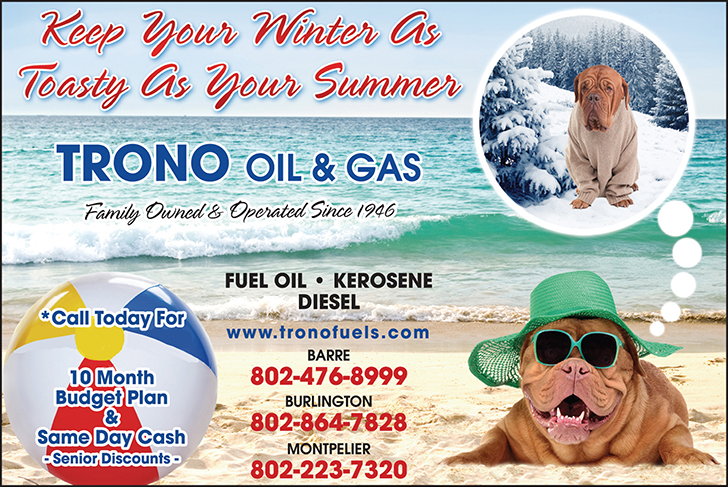