While audiences at classical music concerts may marvel as a soloist’s fingers flow up and down the fingerboard atop the beautiful, polished, wooden curves of a cello, bass, violin, and viola, the musicians themselves are often more attached to the bow.

“Many players have as strong a connection or stronger connection to their bow than they do to their instrument,” explains bow maker—orarchetier—Eben Bodach-Turner at his home and workshop in East Montpelier. For Bodach-Turner, a classical bass player himself, the reason lies in the vibration. “There’s something really tactile about playing an instrument with a bow. You can feel the connection to the string through the bow.” It’s also through the bow, Bodach- Turner believes, that a musician can channel the musicality, be it in the articulation of the notes or the dynamics of the sounds. “Whatever it is that you are trying to do with your sound has to come initially from the bow.” In short, the bow channels the soul into the music. “It sounds overly poetic, but a lot of people refer to the bow as the breath of the violin.” Like the breath, it’s something very personal to a player, where even the tiniest alterations can make a difference. “The way the stick is shaped and bent and tapered will impact how well you feel that connection to the string,” Bodach-Turner explains. “Does it feel good in the hand? Is the weight and balance what you want it to be? When you put it on the string, does it feel stable and connected?” With this in mind, Bodach-Turner makes a point of getting to know the player’s style. “If I’m making a bow specifically for a person for a particular instrument, I’ll spend time with them, listening to them play. I can hear them play a scale and have some idea of the direction I’m going to go in.” All of this input goes into the creation of the bow. “It starts with what piece of wood you’re going to use,” the bow maker explains, “And every step of the way is another decision, and at each of those steps, I’m considering the things that I know about that person as a player and person.” Most of the time, it works out, but on very rare occasions it doesn’t. “You can make all of the right choices all the way along and say I think this is the right bow, and they can pick it up and say, “It doesn’t match my instrument.” While that may seem like a significant cost of time, material, and labor—an average bow taking 60–80 hours and priced at $4,000—going down the drain, it’s less of an issue as good bows nearly always find a player eventually. “The nuance of it is less critical to its overall marketability. I’ll find a home for it. The right person will come along.” The real worry for bow makers such as Bodach-Turner is global. Climate change and deforestation of the rainforest in Brazil put traditional bow making at risk as an industry. This is because bows all over the world have been made for hundreds of years from one kind of wood—Pernambuco (Caesalpinia echinata)—thanks to unique qualities in its grain, density, and pliability, making it the only wood strong enough to be cut very thin and keep its curve for many years. The tree is native to Brazil’s Atlantic Forest and now endangered, with a ban on international trade in place by the Convention on International Trade in Endangered Species of Wild Fauna and Flora. Finished items, such as bows, are exempt so long as they do not include other banned materials such as ivory, allowing international orchestras to travel and perform. However, large stockpiles of Pernambuco cut in the 1970s and ’80s remain available, supplying the material for Bodach-Turner’s (and his peers’) bows, but at a certain point, those stocks will be depleted, especially if international conservation efforts by organizations like the International Pernambuco Conservation Initiatives—a nonprofit made up of “music lovers, teachers, stringed-instrument makers, and conservationists”—are unsuccessful and destruction of the rainforests continues. Depletion of the available reserves is not imminent, however, in part because so much was cut and stockpiled before the ban, but also because of low production. An individual bow uses only a small amount of Pernambuco, and bow makers don’t produce many bows per year. “Most of the people working the way I do are making one or two bows a year,” explains Bodach-Turner, “While the more prolific ones are making, at most, 18 to 20 probably, and that would be a lot.” That said, progress is being made on a more sustainable approach to bow making, including in the “frog” of the bow, which holds the Siberian and Mongolian horse hair in place. Traditionally, it’s made of ebony, but some now come in artificially stabilized hardwoods. The bow’s ivory tip has also been replaced by synthetic materials. Carbon fiber bows are available too, but they channel vibrations differently than wood, affecting the sound. Ultimately, it’s a personal choice for the player. “Climate change is an issue I care about,” Bodach-Turner emphasizes, “and certainly species extinction is something I care about. And here I am in a profession that is using resources that sort of fly directly in the face of that, essentially. And all I can say is that every effort is made, certainly by me and all the colleagues who I know well, to use the resource in the most responsible way we can.”
UNDERWRITING SUPPORT PROVIDED BY 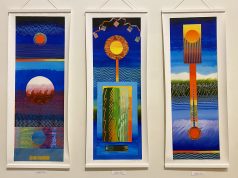