A software system at Kellogg-Hubbard Library that allowed a patrons’ borrowing history to be saved for a year or more is being replaced, and the switch should ease privacy concerns that trace back to the 9/11 terror attacks.

The library had announced in 2008, a time of national ferment about checkout records and privacy, that it was expunging checkout records when items were returned on time. The policy had been almost accidentally reversed by a software purchase in 2012, with notice given at the library, but absent the spotlight of attention the original change had received. That software, named Destiny, which allowed readers’ borrowing habits to be saved, is about to be replaced with new software, named Verso, and the records expunged, library officials said. Reading records and privacy became an issue in the aftermath of the September 11, 2001, terror attacks on New York and Washington, D.C. Congress passed the USA PATRIOT Act, which gave the government sweeping powers to collect records on individuals. Librarians and booksellers—including the then-owners of Bear Pond Books in Montpelier—led resistance to what they viewed as intrusive provisions that affected them. The law allowed federal law enforcement to issue orders to turn over records of books people had borrowed or bought, with no way for the library or bookseller to challenge the demand. The orders often also included “gag orders,” so it was even illegal to tell anyone the order had been received. In January 2003, Bear Pond Books co- owner Michael Katzenberg worked on the principle that the store couldn’t give the FBI information it didn’t have. He ended the store’s records of titles purchased by members of the Readers Club. “We updated the software so that only the amount of the sales is kept as a record of purchases,” he explained to the American Booksellers Association. Many other bookstores and libraries took similar actions. In 2008, the Kellogg-Hubbard Library started expunging its patrons’ checkout records— unless items were overdue. In that case, the record was expunged when the fine was paid. That changed in 2012. The change came when the library bought Destiny, explained Carolyn Brennan, director of library services, and, as of July 1, co-director of the library. Destiny, run by a company called Follett, has no capability of expunging the checkout records of current patrons from the system, she said. As a result of the 2012 software choice, the library has been steadily accumulating data on what people borrow. Verso, on the other hand, will purge patron data by default, although a library user could request to have his or her history preserved. For some reason, pre-2008 checkout records had been retained and were brought into the Destiny system, too. In her office, I asked Brennan to pull up my records in Destiny. Page after page of books and DVDs with familiar titles came up. Overdue books were noted in a scarlet font. There was a gap from 2008 to 2012, but otherwise the records went back to when I first got a card at the library in 2001. “I checked with a few staff members who worked here in 2012,” Brennan wrote later, “and the consensus was that notices about the functions of Follett Destiny, including saving patron checkout histories, were notified via f liers posted in the library, which was the practice for patron notification at the time.” A privacy checklist from the American Library Association recommends that libraries configure their software so patrons can choose whether or not their checkout histories are retained. Kellogg-Hubbard’s new software, Verso, allows that, and Brennan says that patrons’ records are expunged by default. And some would rather have the library serve as the electronic memory of what they’ve read. “Patrons say, ‘I want you, as a librarian, to be able to look up and tell me if I’ve already read this or already seen this DVD, before I check it out again,’” Brennan said. Since its passage in 2001, the USA PATRIOT Act has been modified a number of times, and in 2015 it was replaced by the USA FREEDOM Act. U.S. Sen. Patrick Leahy, D-Vt., was a co-sponsor of the USA FREEDOM Act, and his office cited endorsements of the bill by library associations. Now the USA FREEDOM Act allows judicial review of federal gag orders, according to one library association. Previously, federal gag orders were worded to forbid talking to anyone, even your attorney. Now librarians are free to talk to an attorney before turning over records. Meanwhile, Brennan said patron data from Follett’s Destiny software, the one Kellogg-Hubbard has phased out, will be expunged from its system within a month. The records will soon be gone from off-site servers, apparently, as well; she said Follett’s policy is to purge patron data when a library stops using its software. Soon, not even the head librarian at Kellogg-Hubbard or the top IT person from Follett will be able to look up what I checked out in 2001.
UNDERWRITING SUPPORT PROVIDED BY 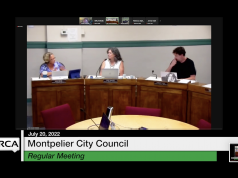