The speed limit on Berlin Street is almost certainly going to come down from its posted 35 mph, and how much drivers will have to adjust should become clear this week.

Residents of that neighborhood who are urging that the limit be lowered to 25 mph are expected to make their second appeal at this week’s City Council meeting. Those who spoke at the first hearing on June 12 cited numerous close calls with speeding cars while shoveling snow and crossing the street, even at the two designated crosswalks. They also said changing demographics have led to more children and families in the area, many of whom are afraid to walk or bike on the increasingly busy road that serves as a conduit to Hospital Hill and the Berlin Mall.

Many, if not most, of those who spoke weredisappointedwiththeresultsofacity traffic study that recommended the speed limit on the 1.2-mile stretch that runs from Granite Street to the Berlin town line be reduced to 30 mph. That did not satisfy Berlin Street resident Gene Leon, who said he has been lobbying the city to cut the speed limit to 25 for two years.

“This is a matter of urgency,” Leon said. “If you look at the problem, 30 is not enough. Barre City is 25 mph throughout. Why not Montpelier? It’s a dangerous situation.”

Leon, who has two young children, said the city should make the speed limit comparable to other residential neighborhoods such as Elm, Northfield, and College streets, where the limit is posted at 25 mph. “The residents that

It might not be as simple as it seems for the counciltosetthelimitbelowthe30mph recommendation. State law requires speed limits to be “effective and enforceable” and based on a study, such as the one completed by Public Works Director Tom McArdle. Whether councilors have the authority to set it below the study’s justification is a bit murky.

In a memo to the council after the first public hearing, McArdle submitted general advice from the state Agency of Transportation indicating, for example, that requests by residents to lower the speed limit must be accompanied by a study justifying the change.

The city’s attorney, Joe McLean, offered legal precedents that tickets issued by a community that disregarded a traffic study and set a lower limit could be overturned

in court, as happened before in a challenge from one ticketed motorist. In another case, a town’s decision to go below the recommendation was upheld, citing the value of the selectboard’s local knowledge over a consultant’s report.

Whatever council members decide, McLean suggested they include a detailed explanation for their choice of a lower limit, “including any and all local influencing factors, such as knowledge of pedestrian and bike traffic, road conditions, curb cuts, sight lines, children living in the area, etc.”

Whether the limit is cut to 30 or 25, council members seem to agree that the harmony between motorists and those who prefer human-powered transportation could be improved. District 1 City Council member Dona Bate said the issue goes beyond Berlin Streetandshouldbeexaminedinall neighborhoods.

“We should think citywide how do we reduce the domination of cars and the unsafe relationship between pedestrians, bicycles, and cars and be friendly to all and more balanced to all,” said Bate, who supports looking at alternative ways to calm traffic. “What if we actually started helping people be more aware that we’re people-oriented and that we need vehicles to slow down.”

Council member Glen Coburn Hutcheson, whose district includes Berlin Street, agreed that cars need to slow down but said he was undecided whether to support the 25 mph request. “Tom’s report was pretty persuasive,” he said. “I think it will depend on what happens

He said the first hearing lacked input from commuters. “There are a lot of people who use Berlin Street that don’t live on Berlin Street, and we didn’t hear from anyone saying that’s how they use it. But it seemed to me at the first hearing that there was a reasonable amount of sympathy (from the council) for those who spoke up for 25. If we get a positive answer about our authority, there might be an appetite for pushing it down to 25.”

Meanwhile, some of the needs mentioned by residents are being addressed. McArdle said that signage welcoming drivers to Montpelier and warnings to slow down in residential areas are being pursued. Efforts to install sidewalks on the stretch of Berlin Street between Hebert Road and Sherwood Drive, where none exist, is being considered in-house after a state funding grant for the project was denied.

Leon said he would be disappointed if the council elects to go with the 30 mph recommendation and promised a robust presence at the second public hearing (June 26).

“A one-week study is not enough,” he said, “The city has an obligation to meet the well-being of its citizens.” 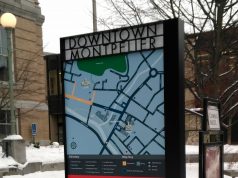