Two elderly women stand back to back, arms linked, one leaning on the back of the other. The bodies of the gray-haired women are wrinkled, their breasts sag, and the skin around their stomachs is loose. The whiteness of much of their bodies contrasts with the deep tan of their arms and faces. The woman on the right, supporting the weight of the woman on the left, looks up to the sky, and with mouth open, sends an uninhibited laugh to the heavens.

The painting, “And We Were Birds” by Aleah Chapin, is one of 21 paintings and 2 lithographs by 17 artists on display in a new exhibition, Reclamation, at the Helen Day Art Center in Stowe. Reclamation aims to challenge how women are typically portrayed in art and media by the male gaze, a feminist term used to describe the largely unacknowledged but prevalent depiction of women as unengaged, sexual objects in art and media. This depiction is problematic because it reinforces the limiting and incorrect view of women as inept and their existence as decorative rather than essential. They are rarely portrayed with a sense dignity or physical realism.

In Reclamation, women paint women, and the images are rather striking. For example, Margaret Bowland’s piece, “The Artist,” is a portrait of a young black girl in front of a colorful background of cartoonish smiling flowers in pinks, magentas, and pale blues. Shockingly, the girl’s face has been painted white. As the viewer’s eye travels around the painting, searching for a reason for this possible hate crime, they will see the little paintbrush in her right hand. It is a captured moment of sadness and contrast, between the ideal flower world that the little girl has created behind herself as the artist, and the stinging realization that she has felt the need to paint herself white in order to belong to it.

In her artist’s statement, Bowland describes how she learned to shape herself to please others, and the emptiness of the result: “As a young woman from a small southern town, I was taught that the less someone knew about you the better. If you presented yourself as a blank page to a suitor, that person could project anything upon that page he wished to see. And you would be loved. What I couldn’t understand was the worth of such love. If who I am is not being loved, then what have I won?”

The painting highlights the interplay of race and gender by reframing the practice of women in many cultures painting themselves white to make themselves more beautiful via the tragedy of a girl who feels she must be a different race in order to belong to her ideal world, a world of her own creation.

While some of these paintings, such as Bowland’s “The Artist” are bold because of their intense imagery, other paintings are significant because of their honest depiction of common experiences of womanhood. When asked why both of her autobiographical paintings, “Wonder” and “Roots,” featured scenes of motherhood, artist Daryl Zang answered that consciously she hadn’t meant to. “The transition to motherhood was shocking to me, as is the reaction I often get to these paintings. We are so used to seeing women with children depicted as serene and fulfilled, but many women easily connect to my images and not the one constructed for us. Motherhood can leave you stripped of your own identity, ambivalent, and sometimes guilt ridden for wanting anything more.  Motherhood left me feeling burdened with great responsibility, having to make sacrifices to my own ambitions, and questioning whether I would regain my equilibrium.”

Zang emphasized that she is proudest when her paintings start a discussion. The Reclamation exhibition succeeds in providing a space for that conversation to happen. As a Vermonter, I am a little disappointed that no Vermont artists are featured. As a woman, I feel that Reclamation is a good first step to challenging how women are portrayed, or rather, displayed as objects. I appreciated the multitude of women present in both the paintings and as artists. I hope for more exhibitions like this in the future, as it would be a shame if this were the only one. 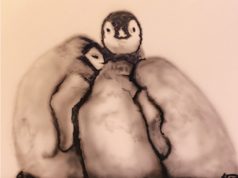