Remembering Dan Neary as a Friend of The Bridge

In the past few weeks, I have been working closely with Carla Occaso to assemble a spread to remember and honor her father Dan Neary.

Neary; who had a career as a writer, journalist and photographer; died on March 9.

We remember and honor Dan Neary for a number of compelling reasons.

In the earliest days of The Bridge, even before our first issue was published, Carla remembers her father’s excitement about the idea of a new Montpelier paper. He attended some of the early planning meetings and said Carla, “He would talk about The Bridge around the kitchen table at home.”

Over the past few years, Dan expressed his friendship to The Bridge by contributing his writing and photography. As an experienced journalist, he read the paper carefully and critically and was keenly interested in its success.

Until just a few months ago, Dan’s daughter Carla Occaso was managing editor of The Bridge and from time to time Dan would join us at the paper for birthday parties and other special events. He quickly became part of our extended family.

Neary was born in New York City. When he was a boy, his family bought a summer house in Mount Holly, and he found himself drawn to Vermont.

As a young man in his 20s, Neary graduated from Yale University with a bachelor’s degree in English. Subsequently, he earned a master’s degree in writing from Vermont College (now Vermont College of Fine Arts). After he met and married the former Emily Virginia Chew, the young couple moved to Vermont and finally settled in East Montpelier.

Neary’s first job in Vermont was as a reporter for the Rutland Herald. From 1968 to 1973, Neary served as Bureau Chief for the Associated Press in Montpelier. He also worked for the Vermont Department of Employment and Training.  In local press circles, Neary is still remembered for publishing several newspaper articles about the Vermont Legislature’s enactment of a law that required dairy farmers to install “bulk tanks.” This bulk tank requirement caused a flood of dairy farm foreclosures.

The spread that follow includes a remembrance of Dan Neary by his daughter Jessica Neary. It also includes Dan Neary’s essay about the coming of spring in Vermont, entitled “The Coming of Green. And the spread includes a small selection of Dan Neary’s photographs.

Remembering My Father: A Writer’s Life

Today, April 17, 2018, my father would have been 78. Instead he died peacefully a month ago at Woodridge Nursing Home.

My earliest memory of the importance of language in our family was in 1969. We were watching the moon landing at my grandparents’ house in Mount Holly. My grandfather exclaimed, “Look at all the detritus!” We laughed at the fancy word for moon rocks, and it struck me that precision in language could be delightful.

My father was precise, not just in words but what he didn’t say. He was not a talker, but a listener. His first Vermont memory was a farmer calling his cows, “Ca-Boss! Ca-Boss!” That simple call informed his writing for the rest of his life. His career was dedicated to voicing the concerns of Vermont farmers.

My father was funny. When serial killer Jeffrey Dahmer was in the news my father declared,

“I would never associate with Jeffrey Dahmer!”

“Because of his odious behavior!” He smiled as he spoke the understatement, at which I laughed out loud. No word would have fit the subject, but “odious” was the closest word he had.

He read biographies of writers, and those written by great writers. His journalism background lent a plainness to his style. He was resolutely prosaic, yet his prose could rise to poetry.

A source of literary pride to him was an early headline he crafted in the 1960s, as a reporter for the Portland Press-Herald in Portland, Maine. Describing a story about the Kennebunkport Dump Society, he wrote, “A Refuge for Those who are Interested in Refuse.”

That was Daniel A. Neary, Jr. in a nutshell: clever, concise, words for their own sake.

I miss him terribly. Every day I hear his voice and always will.

Poet Laureate Seamus Heaney wrote about the Latin plaques in arboreta that they weren’t needed, “And yet I like the names.”

So did my father, and in there his greatness lay.

The Coming of the Green

by Daniel A. Neary Jr.

Between the whites of the melting snows and the whites of blooming apple blossoms, the green comes to Vermont. Usually in early May, it rolls northward and upward saturating the fields, bushes and trees with verdure. Naturalist Way Teale says spring green creeps northward at the average rate of about 15 miles a day and climbs mountains at about a hundred feet a day.

It is an annual event of unsurpassed visual beauty in Vermont (a state which many believe owes half of its name to the color green). In the springtime, the color green takes on many shades. At first, the shoots of grass penetrate the matted browns in the fields. In the woods, wild plants and weeds push through the wrinkled leaves pressed together by the weight of the thick snow. Ferns yo-yo upward. Patches of skunk cabbage unwind slowly, showing large, corrugated leaves, even before the buds appear on the trees.

For a short period in the early spring, the green changes from a yellow, lighter shade to a bluer, darker color. Face into the sunlight in the morning or evening, and the spots of the leaves from the poplar trees will shimmer and glow in a delicate effulgence. At about the same time, the strands of leaves of the willows will pick up color before the leaves appear on other trees. Patches of poplars and willows will stand out as swatches of light green on an otherwise leafless hillside, long before it is drenched in foliage. Buds of the maples, first tinted red and yellow will coruscate. Look across a green meadow in the afternoon, and it will make you envy the grass-eating animals of this world … luxuriant, yellow-green blades of grass are everywhere.

Grey planes of mountainsides are now a hodge-podge of colors of the lighter greens of the meadows, next to the still darker blue green of the strands of spruce. It is all quite a contrast from the white, dark green and grey of winter and the flat browns of early spring.

In some years, when there is a sunny spell coincident with the arrival of the green, a phenomenon of incredible beauty takes place. It is impossible to photograph because the total effect occurs over several days. Only the elements comprising this natural, impressionistic sight can be pictured. The rest takes a little imagination and the ability to sustain visual experience over a couple of days.

With the sun at your back, face a ridge of mountains. Imagine the mountains are rocks on the seacoast. Look at them: cold and grey, like rocks on the shore. When the wind blows, think of it as water rushing, filling the valley; the wind becomes the water turning the branches, making them sparkle in the light. This sense of filling and crashing of water onto rocks also occurs when the green arrives. Foliage pours northward and upward over the craggy, worn forms … a wave of green takes not seconds but days to roll, crest, splash and tumble.

The mountain ridge fills with the green of spring like a wave of differing shades, patterns, swirls and froth of dotted green—first the buds bursting in the valleys on the southern side, and then, the gentler greens of the leaf sprigs in the foothills—buds at the higher elevation—now in aggregate looking almost white—in any event—lighter than the greens below. Think of the wave, the sea water rolling forward, taking on colors of the rocks and sky. At the top is the foam and then the spray. Droplets form a mist against the grey rocks. Finally, a halo of mist and spray sparkles in the light.

That’s the way green looks on the sides of the mountains in Vermont in the spring—the movement, the rolling—a time lapse sequence of spring—ocean style. Spring greens go higher up the mountains each day. Green climbs the mountain—all that it takes to get the name Vermont. 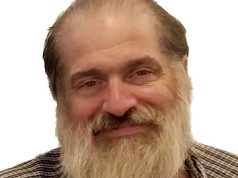 The VSECU Future We See