Home Uncategorized John Hollar Offers Advice for the Next Mayor of Montpelier
Facebook
Twitter
Email
by Michael Bielawski
With just a month to go, Montpelier Mayor John Hollar sat down with The Bridge at his law office on State Street to reflect on his six years of service to Montpelier and to offer some advice for future mayors.
“The most challenging thing, I think, is to understand what your priorities are and to try and think broadly about what you can best do as mayor to improve the quality of life in Montpelier for all the residents here,” Hollar said.
“And then focus on sort of broad themes, because as mayor in Montpelier you are not charged with running the day-to-day operations of the city, but there are a lot of tugs on your time and your focus.”
Three goals for Hollar were to improve city infrastructure such as roads and sidewalks, restrain the growth of taxes, and jump-start a couple of city projects stuck in stagnation.
Regarding the infrastructure, the city now spends about $1 million more annually than it had before, he said, and the tax rate is now a little below the rate of inflation. As for the two big city projects he wanted to jump start, he admitted it had been “a very frustrating” ordeal.
One of these projects was a multi-use recreation trail, which finally should start construction this year. Another was the Taylor Street project, which includes a new transit center, housing development, and a connection point for the recreation trail.
“We haven’t gotten as far as I would have liked, but the good news is those projects are scheduled to begin this year,” he said. “It has been difficult, getting the easements, the funding, the permitting and all that has taken an enormous amount of time.”
Now he said all the pieces are in place, but it took patience.
“I think patience is important, but I think impatience is important as well,” he said. “I mean the fact that these projects took 20 years to get underway might reflect a little too much patience.”
He related Montpelier’s effort for a bike path with the one down in New York City.
“Mayor Bloomberg transformed Manhattan, the most crowded, dense, expensive real-estate on the planet and was able to convert that city into a bike-friendly place,” he said. “And I think we sometimes have a hard time making progress on projects like this.”
On the transformation of Montpelier, one of the ongoing discussions has been about closing-up Langdon Street or State Street, either permanently or for certain times of the week, to promote pedestrian traffic and try to gain some of that Church Street atmosphere from Burlington.
There may not be any permanent banning of traffic, but the idea of a temporary occurrence has gained some traction. He said the City Council just voted the other day to allow the farmers’ market to move to State Street during the summer.
Another project that’s been slow to gain traction has been an economic development corporation to spur business growth and increase the tax-base in town. Hollar said there is a terrific board in place, but it recently lost its executive director, so that has been a hold-up.
An experience which helped shape his time in the mayor’s seat was he had worked in Washington DC for U.S. Rep. Mike Synar, D-Oklahoma, from 1983 until 1989, before moving to Vermont in 1990.
“I’ve been fortunate to be around positive role-models. He had a big influence on me just in terms of how to think about serving in a public office,” he said. “But also, here in Vermont I’ve had the pleasure of seeing very talented people serving in the State House.”
Hollar has only been in one contested election, two of them were uncontested and the upcoming race is currently uncontested, as city councilwoman Anne Watson is the only candidate.
Hollar commented on what this says about the public’s willingness to fill the mayor’s seat.
“We have no trouble filling the vacancy on our boards and committees,” he said. “It’s been one of the pleasures of serving as mayor is seeing the tremendous level of volunteerism in Montpelier, and the quality of people who step up to serve on our boards and commissions, so I don’t think it’s due to apathy that we don’t have a someone running.”
Another piece of advice Hollar offered for his successor is to simply be available.
“Being responsive is important, whether it’s to the media or to constituents, but being available,” he said. “One of the nicest compliments that somebody gave to me not that long ago was that ‘you show up’ and I’ve always thought that’s important.”
He did say that he sees more work in public office in his future.
“I doubt that I would pursue anything in DC, but I do think about it certainly,” he said. “I believe in public service and in the ability of political leaders to improve the quality of life and the people they represent, so I think at some point in my life I will probably pursue another position, but I don’t have any plans right now.”
Michael Bielawski is a freelance reporter for The Bridge. He can be reached at bielawski82@ yahoo.com.

John Hollar Offers Advice for the Next Mayor of Montpelier by Michael Bielawski Mayor John Hollar enters his final month of a six-year tenure as Montpelier’s mayor. His primary advice to his successor is to make his/her self available to the public whenever possible.
UNDERWRITING SUPPORT PROVIDED BY 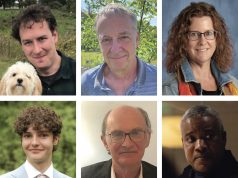