MONTPELIER — Jan Abair was always a feisty “woman before her time.” Jan passed away after a short illness at the age of 86. Jan was my friend and a neighbor from two houses down, her place on Miles Court which she had called home since 1941 and until just a few years ago. While on Miles Court she was evacuated twice because of floods. The floors in her front room slanted to the north. I was never sure whether I felt off tilt when I visited because of the floors or the sheer pleasure of and incredulity at Jan’s energy and community commitment. She shared her house with characters like her dancing turtle Clancy who lived to be 29, known for his version of “the whammy,” and her fish named “Woody” who danced through his gills.

Jan graduated from St. Michael’s Graded and High School and attended Vermont Community College. She worked for an agency of National Life Insurance until moving on to the Vermont Agency of Transportation where she worked for 43 years until retirement. At the agency Jan oversaw the administrative coordination of many Vermont highway openings including Vermont’s interstate system and the Super 7 in Manchester. She arranged the Air National Guard’s “flyover” for the grand opening of Interstate 89. She also did public relations work for Green Up Day. Later she became the compliance officer for the affirmative action program, the Davis-Bacon Act, and the State’s on-the-job training programs.

Jan’s father Joseph Abair had a long history of dedicated civil service. Ironically, when Jan served as our city historian, she worked on the 1992 flood book, “Ice and Water.” Her father had authored the booklet on the 1927 flood. Following in her father’s footsteps, Jan epitomized the civic servant. Her community service record in Montpelier included becoming the first woman to serve on city council. Jan spent five years on city council, five years on the planning commission and six years on the recreation board. She was instrumental in getting girls the right to play baseball and in preventing the tear down of what is now home to Montpelier’s Vermont Mountaineers.

Jan’s extended city service commitments included eight years on the board of the Central Vermont Memorial Civic Center (the ice rink). Jan represented Montpelier at the 1980 Olympic Winter Games, was Montpelier Business and Professional Women’s Club “Woman of the Year” in 1981 and Montpelier Rotary’s “Distinguished Citizen of the Year” in 2005. She was active on the Montpelier Historical Society, The U.S.S. Montpelier “SSN-765” Commission Committee, a number of state boards, and served as a tour guide for the Friends of the State House.

Jan never forgot to “have fun” during her busy life. She loved to downhill ski with her close friend Teresa McGinley in winter and to swim and play tennis during the warmer months. She was mischievous and skilled. The last time I met with her on a community issue occurred when the city and a developer were discussing the construction of a parking garage to be dug into Blanchard Park behind Miles Court. The proposed retaining wall would have blocked all the sunlight into Jan’s home. Not one to pursue self interest, Jan appealed to all the immediate neighbors regarding her concerns about the impact on the area. Although the area was cut into for parking spaces resulting in the erosion of a substantial portion of the hillside, the garage was nixed. Jan’s take on it was that we gave in to the parking spots, but kept the sunlight and gained more privacy as the hillside behind our houses became less accessible.

Jan was always perky and well dressed, usually with a hat on and looking “purdy.” However many years flew by, Jan was always ready for the next new challenge. She was in her late 70s when I asked her if she’d ever skied out West. Her answer, “not yet.” She gave me the same answer when I asked if she’d ever been married, “not yet.” For Jan, life was full of tomorrows and new horizons, filled with spirited optimism, and always seen through her mischievous and smiling eyes. 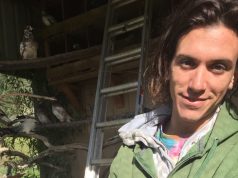