Late on the night of May 18, the Legislature passed an extraordinary budget. It made historic investments in housing for working Vermonters. It made significant investments to help Vermonters suffering in emergency rooms from lack of mental health care, for Vermonters who want to work but can’t afford child care, for Vermonters who need an affordable path to higher education. It made modest investments to grow our economy, with particular attention to small businesses and rural Vermont. It funded all of our ongoing obligations including fighting opioids and continued support of an expanded judicial system to help children and families caught in violence and drug abuse.

Following a legislative session of honest dialogue and compromise between parties with different points of view — but all dedicated to serving Vermont — it was very discouraging to listen to an address from the governor saying he would veto the budget. Why?

Given the investments the Legislature made, it would be fair to assume that the budget raised taxes and fees or relied on gimmicks to balance the budget — and that of course the Republican governor would veto a tax-and-spend proposal from a liberal Legislature. But, the Legislature did not raise new taxes or fees; it did not use “one-time” money to pay for ongoing expenses. It does not shift state expenses to property taxes. It funds reserves. It positions the state for expected revenue downgrades and federal grant reductions. With a forecasted revenue growth in fiscal year 2018 of 3.7 percent, the budget the Legislature adopted only grew 1.3 percent. By making hard choices we managed to invest in Vermont without asking Vermonters for more money.

Now we find ourselves thrust into a debate not even touched upon during the legislative session.  In the last days of the session the governor proposed an idea which fundamentally changes who makes decisions about the future of our schools. Cast as an attempt to save money, it is really about who controls school funding. The governor proposed to move bargaining for health care to the state level and to “harvest” those savings. Implicit in this proposal is the notion that school boards can’t, or won’t, make these savings and return them to taxpayers. At the heart of this debate is whether locally elected school boards should make decisions about how property taxes are spent — or should state government make those decisions?

I doubt that anyone who ran for elected office last year suggested that there should be more state control over property taxes or over our education system.

Can our education system be improved, or costs contained? Can health insurance be better managed? Of course. But before we fundamentally change one of the most important institutions in our society we ought to take the time to carefully consider what change means. 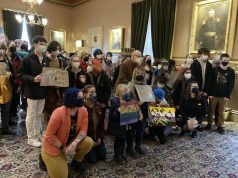