MONTPELIER — What does it feel like to have a dream come true? How about many a little girl’s dream?

Montpelier High School Senior Kelsey Golonka, 17, came one step closer to finding out. She won first place in the Miss Vermont Teen pageant, which was held Nov. 20 at the Spruce Peak Performing Arts Center in Stowe. This puts her in line to compete at the national level. Golonka will go on to represent Vermont in the next round of competitions for the national Miss Teen USA 2017 pageant. Exactly when and where they will be held has not been announced.

Golonka visited The Bridge for an interview Dec. 29 accompanied by her crown and sash in a special carrying case. This win did not come about without effort, which became evident listening to Golonka describe the preparation required to succeed. She sounded as though she had a good handle on the focus she needed to succeed, from noticing most pageant winners have either a black or white dress (she hedged her bets and had both black and white in her two-piece Sherri Hill gown) to realizing how she had to practice the basics such as walking and talking. “They want someone who is real and who can relate to people across the country,” Golonka said.

The gown came from a store in Danvers, Massachusetts, called Glitterati. Golonka went there with her mother, grandmother and little sister, Kenzie. The gown has a black over-the-shoulder crop top, over a shimmering white mermaid-style skirt. When Glitterati discovered she was a contestant in the Miss Vermont Teen pageant, they contacted her and offered to be a sponsor. Golonka will travel even farther to get outfitted for the national contest. She has already been invited to the designer’s headquarters — Sherri Hill in Austin, Texas. “She invites all the state title holders,” Golonka said. She will also go to Chicago to the designer, MacDouggal. “Those are the two big dress designer names for pageantry and prom,” she said.

In addition to the title and the honor of wearing the sparkling tiara and the beautiful jewel-studded sash for a year, Golonka won a scholarship to Lindenwood University in Missouri. “I would like to study nursing,” Golonka said.

This brought us to Golonka’s real interest underneath the glitz and the glam: helping others. “I really want to be a nurse-practitioner and give back to the community. When I suffered a concussion, it was the nurses who helped me. I want to be that person for kids who are struggling.”

Golonka told The Bridge she had suffered two debilitating concussions, one in freshman year and the second in sophomore year, while playing on the field hockey team at Montpelier High School. She suffered her first concussion while leaning over trying to “attack” the ball when another player intervened. She was struck in the face by both the ball and the field hockey stick and had to go to the hospital, where she was diagnosed with concussion. That led to many medical problems. “I had trouble concentrating. Memory loss was a big issue,” Golonka said. She had to have cognitive therapy and physical therapy. And she had to have special help to get through school because the injury affected her concentration. But she didn’t learn her lesson at first. She rejoined the team the next year and suffered a similar injury. She left field hockey, but she still gets daily migraines related to the incidents.

Having to deal with multiple setbacks from the concussions led to Golonka’s desire to become a nurse-practitioner and to spread the word about the dangers of concussions. Becoming a contest winner will give her that opportunity. “I wanted to go around the state and talk to teenagers about body image and concussion awareness.” She went on to describe how many people don’t realize a concussion is a serious injury, even more so than a broken arm or leg. Also, she wants to spread the word that current medical advice from doctors is to keep exercising even during the first week after a concussion.

In fact, exercise is a big part of Golonka’s life. “Everyone should exercise,” she said. Her routine involves cardio mixed with weights. She can’t run because of the concussion, so she walks on the treadmill for an hour and does weight training, including free weights. This, she said, helped her be in top condition for the “athletic wear” portion of the Miss Teen Vermont contest.

Golonka is pleased the Miss Teen pageant partners with some “really amazing organizations,” including Best Buddies (which helps children with Down syndrome) and Smile Train (which helps pay for surgery for children with cleft palettes). “Ever since I was little, my grandparents donated money to Smile Train in our names, so I am really excited to promote that throughout my reign,” she said.

How will you know Golonka when you see her? In addition to the tiara and sash and a spectacular smile, she will have a magnetic car sign that will say, ‘Kelsey Golonka Miss Vermont Teen’. She expects to partcipate in Montpelier’s Independence Day parade.

Why did she enter the Miss Teen contest to begin with? “I have a really huge family … four siblings and seven cousins. I always wanted to do something different. We all live in Montpelier, we all play tennis. I think pageantry is a good way to bring out confidence and public speaking skills,” she said.

The toughest part of the journey has been how nervous she gets doing interviews. She said there is a fine line between sounding polished and sounding too rehearsed.

The most satisfying part of the process has been meeting the other contestants. This has led to some enduring friendships. Also, the process has allowed her to have increased confidence.

How does it feel to win? “I was overjoyed. I was screaming. I was so overwhelmed and so proud of myself. My entire family was there. I have a huge and amazing family that has supported me through the entire journey, and they will continue to support me through my journey to the national pageant.” 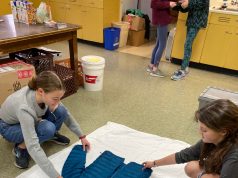