Here’s how former Plainfield Select Board member David Strong tells the story of how the Plainfield Opera House got a much-needed new piano:

“Four years ago the Plainfield Opera House building was shut down.

We had a massive community effort to restore it, renovate it and upgrade the building’s systems.

I was on the select board at the time and I helped write some of the grants that helped raised needed money for structural work, drainage work, a new standing seam roof, a new heating system and ‘new electric’ throughout the building.

We built a warming kitchen in the opera house for food preparation. We built an accessible bathroom. We raised about $300,000. The building is owned by the town. About a quarter of the needed money came from private donations, another quarter was tax money and the rest was grants from the Vermont Arts Council, the Vermont Housing & Conservation board and other agencies and organizations.

Now that the renovations are completed, we are looking at bringing back programming in the opera house and one thing we needed was a piano that was suitable for a small hall like the opera house. We needed a good piano that a concert pianist could use. A piano tuner found us a Baldwin piano (model L). Concert pianist Diane Huling tested the piano and recommended it to us. And the current owners were willing to sell it to us for $5,000, considerably less than its market value.

We’ve started a new organization called Friends of the Plainfield Opera House. We knew we needed a piano so we said let’s raise the money in time for Naomi Flanders to stage Mozart’s “Cosi Fan Tutte” at the opera house in mid-October. “We’ve raised about $4,000 now and we’re hoping to complete the fund drive by the end of 2016. That’s when the current owners need to be paid.”

One more detail and this is personal, “The piano is being dedicated to the memory of my mother, Jane Reid Strong. She was a concert pianist as a young woman. She was from Vermont and when she retired she returned to Vermont and performed on the piano. She was an accompanist for the Barre Choraleers and she played organ at the Church of the Good Shepherd in Barre.

In closing, Strong said, “I’m thrilled at the dedication of the piano to my mother. She loved playing the piano. She loved all kinds of music. And this is something we can do to honor her memory.”

Editor’s Note: David Strong noted, with thanks, that the Monteverdi Music School has been willing to act as the Fiscal Agent for Friends of the Plainfield Town Opera House during a time when the organization doesn’t yet have (tax-deductible) not-for-profit status. Because of Monteverdi’s help, donations for the piano can be tax-deductible. 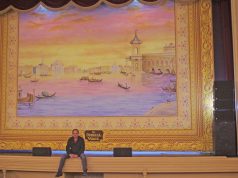 Opera House Emerges From The Darkness 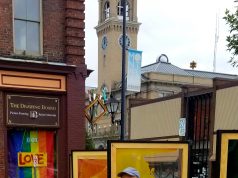 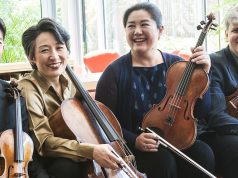