In September 2013, filmmaker Bess O’Brien and Kingdom County Productions released “The Hungry Heart,” a documentary that toured Vermont and later other parts of the country and that raised public awareness about the deeply worrying epidemic of opiate addiction.

Now, O’Brien and Kingdom County Productions are launching “All of Me,” a documentary about eating disorders, food and how we relate to food, body image and diet. The film is also about how we compare and judge ourselves against the celebrity men and women who seem to be everywhere — in magazines, in movies, smartly dressed and successful — making us feel less beautiful, less glamorous, less attractive.

During October “All of Me” is touring Vermont with two screenings on successive nights, in Montpelier on Friday, October 7 at 7 p.m. at Bethany Church on Main Street, and in Barre on Saturday, October 8 at 7 p.m. at the Flying Stage at the Resource Store at 30 Granite Street.

O’Brien’s “All of Me” — despite its focus on two eating disorders, bulimia and anorexia — compels us to look at the more wide-ranging issue of the place of food in our lives. We crave food when we’re hungry. We also crave food as a source of pleasure and satisfaction. We want food to make us feel better when things go wrong. And how desperately many of us want a body type other than the body type we have. We don’t want to be fat. We want to be slender. We want our bodies to be appealing. We want to look and feel like someone else.

Sometimes people with an eating disorder are highly successful in other parts of their lives. They might be high academic achievers with straight As. They might even come across to their friends and family as pretty normal. But they might be hiding something or feeling that their life is in crisis or out of control or there is maybe something in their life they don’t know how to handle. But eating is something they can control and an eating disorder is something they can hide.

In a phone conversation with The Bridge, O’Brien said, “If you’re a woman who grew up in the United States, you have dealt with body issues and food.”

In the course of making her film, O’Brien met people who had become obsessed with food and obsessed with weight. “It can take over your life,” she said.

Someone with an eating disorder might fixate on food because of anxiety, depression, some event or misfortune in their lives or something they didn’t understand about themselves that made them feel unworthy or made them feel ashamed. O’Brien said that on the basis of the screenings of the film since its recent release, she feels that many people will be able to relate to it. “Any woman can relate to this film. How they grew up.” Were they chubby? How did they look in a bathing suit? And men — what about men on diets, going to the gym, looking good in a suit, looking good at a club. When you’ve got control of food, sometimes you feel you’re in control even when the world around you feels out of control, she said.

Toward the end of the phone conversation, O’Brien discussed her attitude of compassion toward the girls, women, men and boys who appear in “All of Me.” She doesn’t feel that she’s “here” and the men, women, girls and boys who figure in the film are over “there.” They may be suffering from an eating disorder. They may have a serious issue or even an obsession with food. But they are “neighbors, friends,” she said.

O’Brien said she encourages parents to come and see “All of Me.” She sees her film as a way of helping parents talk to their kids about food, how they relate to food and their body image. “If you have ever struggled with food, with body weight, or depression, this movie will connect with you,” she said.

As part of the screenings of “All of Me” in Montpelier and Barre on October 7 and 8, O’Brien and some of the people who appear in the film will be available for a question-and-answer discussion with the audience. 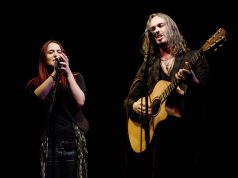