story and photos by Marichel Vaught

MONTPELIER — Coffee enthusiasts Caroline Williamson and Chris Gleason have brought their passion for the bean to town at the beginning of July with Tremolo, a pop-up coffee shop inside The Front art gallery on Barre Street.

“I have an obsession with coffee,” said Gleason. And why name the pop-up Tremolo? “Tremolo is a musical vibration, similar to the shake you get from being over-caffeinated!”

Unlike your typical already-prepared-in-urns coffee shops, Tremolo individually brews each cup to order using the slow-pour method. As with craft beers, the style of pour can affect the coffee’s flavor. The whole process takes approximately three minutes, from weighing and grinding the beans to pouring hot water over the grounds in timed increments. The initial pour, called the bloom, releases the aromatics in the grounds. Hot water is slowly poured by hand in spiral movements. The result is a flavor

profile that is both intense and one to be savored. Gleason said that he has customers who regularly add sugar or milk to their coffee, but when getting a cup from Tremolo, they prefer to have it black.

Tremolo also pours cold coffee brews that come out of taps akin to brews at your local pub. Included ‘on tap’ is a nitro cold brew which, when poured, has a dark caramel-like consistency and settles similarly to a stout beer. The nitrogen in the brew cuts the acidity, giving the cold coffee a creamy, smooth flavor.

Tremolo procures their beans from Brio in Burlington and 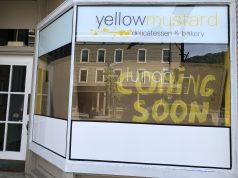 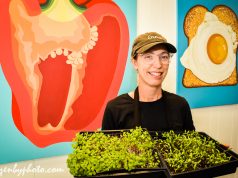