MONTPELIER — On his second day working as a student reporter for The Bridge, Nathan Grutchfield got to interview the potential next first lady of the United States — Vermonter Jane Sanders.

Sanders called The Bridge February 24 from Missouri, just before a political event, after a fast-paced jet-hopping jag from South Carolina to Massachusetts to Virginia to Missouri. After that she and her husband, United States Democratic Presidential Candidate, Senator Bernie Sanders, I-Vermont, will head to Oklahoma, Sanders said. They had been flying on commercial flights at a coach rate, but the pace has picked up rolling into Super Tuesday, so since earlier in the year, they are flying in a private charter plane along with United States Secret Service, national television news outlets and campaign assistants.

Even though Jane Sanders was in the middle of an extremely busy — if not pivotal — moment in the campaign, she took a few moments to speak with Bridge reporters, including Montpelier High School sophomore Nathan Grutchfield.

“I am a big fan of you and Bernie. I am 15 years old. What do you think it is about Bernie and yourself that (is so popular with young people?),” said Grutchfield.

Sanders said she thinks Bernie is popular with youth because the topics he chooses to talk about are important to young people. Such topics include climate change, college education, wages, jobs, the economy, and even war and peace. “They know he means what he says … in terms of making America the country that we want it to be as opposed to the way it is. He is not doing politics as usual. He is not trying to tear down his opponents. He is trying to invigorate democracy.”

Sanders then asked Grutchfield why he supports Bernie. Grutchfield replied, “He is one of the most passionate candidates about the issues that people really care about and that is what makes him so appealing. People can see he really cares,” Grutchfield said.

Other Bridge writers took turns asking questions and she responded during the brief interview. Sanders said she does not have any particular plans, agendas or projects to embark on if she becomes first lady the way Michelle Obama did organic farming and fitness. She said she would continue to support Bernie in whatever way is necessary as she is doing now.

She recalled Bridge publisher Nat Frothingham from his days of involvement with Two Penny Theater.

Further, Frothingham asked why she called The Bridge when she was jet setting with ABC and CNN.

“I said to Carla (Occaso, managing editor), ‘why would Jane be reaching out to a paper as small as The Bridge? We don’t have big media and we don’t have much clout,” Frothingham said.

“Barbara Vacarr (former Goddard College president) told me that Carla would like to talk to me…so I said, ‘Oh no, I didn’t get back to Carla’,” Sanders said. Occaso had tried to reach Jane Sanders through social media months ago just after Bernie Sanders announced his candidacy. “They (The Bridge is) just as important as ABC News,” she said.

Frothingham went on to ask how the Sanders think they will fare in the days ahead from an election standpoint.

“Bernie is as committed as he has ever been,” Jane Sanders said. “The last three polls just had a thing saying he was leading. It is not over until it is over.” 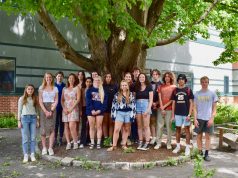 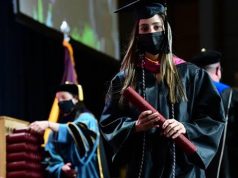 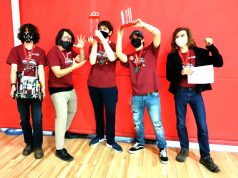