A few days ago I talked by phone with James Alvarez, the eldest son of Raymond N. Alvarez, and James related his father’s life to the larger American immigrant story and to a time and an era in Montpelier that appears to have largely passed.

The Alvarez immigrant story began in 1911, when Raymond’s father, Narciso Alvarez, then a 16-year-old youth, left Navajeda, a small town in northern Spain, for a new life in America.

After coming to America, Narciso married Josephine Ghiringhelli who came from an Italian family. Anyone who remembers Villa and the Capital Market that he opened in 1927 at 116 Main Street — will remember Josephine Alvarez and Josephine’s sister Rose.

Raymond N. Alvarez (Villa and Josephine’s son), was born in 1927, the very year that Capital Market opened.  Except for a five-year break after he graduated from Montpelier High School, Ray spent his entire life in Montpelier. Growing up, he worked at the Capital Market. He became the store’s meat cutter and later he became the store’s owner and proprietor. As owner and proprietor, it was he who decided to close the store after the 1993 Montpelier flood.

Four years before he died, Ray talked to The Bridge about working at Capital Market as a boy.

“I probably started working at the store when I was 14 years old, ‘pecking’ potatoes,’” as he put it, and “sweeping the floor.”  Talking more about handling potatoes, he said, “The potatoes came in a 60-pound bran sack and were dumped into the cellar through a chute in the sidewalk. It was young Raymond’s job to “peck” potatoes into 10 or 15-pound bags. And that,” he remembered, “was back at a time when a 10-pound bag sold for 49 cents.”

When Ray graduated from Montpelier High School in 1945, he enlisted in the United States Marines and completed his training at Parris Island. He was on a troop train headed west — no doubt headed for combat in the Pacific Theater — when that troop train was stopped at Fort Polk, Louisiana. It was sometime around August 15, 1945 (VJ Day) when the news of Japan’s surrender was announced. “It was a good thing,” said his son, Jim Alvarez, about the sudden end of the war. Had the war not ended, “His story (Ray’s story) would probably have ended in the Pacific.”

After the World War II until 1948 Ray Alvarez served the rest of his enlistment at the U.S. Naval Air Station in Puerto Rico.  Then he attended Vermont College and after that he studied accounting at Burdett College in Boston before coming back home to Montpelier and working at the Capital Market.

But back to the immigrant story.  Ray’s son, James, described the Capital Market as a family store that represented what James called “the immigrant mentality.”  The idea of work had nothing to do with an eight-hour day.  As James put it in his own words, “Family was work. Work was family. Everything revolved around that store for 60 years: the Depression, the War, the Post-War” — it was all part of the American immigrant experience.

Jim Alvarez remembered the hard work in the lead-up to Thanksgiving when hundreds of native turkeys were brought into the store. The turkeys had to be cleaned, plucked, hung and tagged. There was much work to do before they could be stuffed into the Capital Market meat case.

Ray, himself, talking to The Bridge four years ago, remembered the turkeys at Thanksgiving and the fruit baskets at Christmas. “I would be there from 6 in the morning until 12 midnight,” he said.

And yet it wasn’t all work either.

In 1956, Villa bought what the Alvarez family now calls “camp” and camp was a place that Ray’s son, Jim, said, “dominated his father’s life — dominated the family’s life — for the next 20 years — and was a place Ray loved.”  Elaborating on this, Jim said, “Boats, water skiing … and fishing filled the 24 hours Raymond spent at camp each week and on summer vacation.”

Then there was trapshooting, which was for Ray, much more than anything like a hobby. Here, we turn to Dennis DeVaux, one of Ray’s longtime trapshooting friends who talked to The Bridge by phone and described what the sport meant to Ray.   “It was big in his life. It was huge. He was passionate about it,” said DeVaux, who first met Ray in 1969 when DeVaux himself had first started shooting.

According to DeVaux, Ray was “very good” at trapshooting, winning several Vermont titles. Ray travelled and competed throughout New England. He went to the National Grand American Trapshooting Tournament in Vandalia, Ohio. “Then when it moved to Sparta, Illinois, he went out to that.” Ray went to Florida. He went out west to Nevada, Arizona and Texas.

After Ray turned 65, he qualified for the Veteran’s category and won some of the veteran’s titles in Vermont and New England. “He loved the Montpelier Gun Club,” said DeVaux. He was active in making improvements to the Club in remodeling the bunkers — that is — the machines that throw the clay pigeons out.”

On the personal side, DeVaux appreciated Ray’s sense of humor. “He was quite a conversationalist. He was good for a chuckle, a joke, a story. He loved people. He loved travelling, eating. He loved the good restaurants across the country.”

Tim Newcomb, who works in Montpelier as a graphic designer and lives in nearby Worcester, was a longtime customer at Capital Market before it closed in 1993 and shared a few of his memories of Ray with The Bridge.Newcomb took note of the kind of service that Ray and the Alvarez family offered their customers. Elderly people and shut-ins who couldn’t get out of their homes to shop would phone the market and Ray would shop for them at the store and then deliver these groceries to their homes.

Everyone knew Ray, he knew them and in Ray’s service and in the Capital Market itself, Newcomb saw “a kindness and grace” — part of what he called “the old Montpelier” — a time and era that has now largely passed.

Raymond N. Alvarez, 88, of Westwood Drive in Montpelier, died on Friday, November 13, 2015 at the Birchwood Nursing Home in Burlington, Vermont.

He was born on March 8, 1927 in Montpelier, the son of Narciso (‘Villa’) and Josephine (Ghiringhelli) Alvarez. He graduated from Montpelier High School in the class of 1945. After high school he enlisted in the United States Marines and served until his honorable discharge in 1948. He then attended Vermont College and Burdett College in Boston, MA where he earned his associates degree.

On October 25, 1953, Raymond married Maxine Norton of Putnamville, Vermont. She predeceased him in 1993.

Raymond was the proud owner and proprietor of the Capital Market on Main Street, a business that was started by his father in 1927. Raymond, or Rico as he was known, was a lifelong Montpelierite. For 50 years he could be seen in his white butchers jacket as he delivered meats and produce to the restaurants in town and at the daily meeting with other Montpelier merchants at the Coffee Corner.

Raymond was a member of the Montpelier Gun Club and had a passion for trapshooting. He traveled throughout the United States to compete in trapshooting events. He was considered one of the top shooters in the U.S. and frequently won Senior Veterans Category at shoots he attended.

Survivors include his long time devoted companion and friend, Francese Setien of Montpelier and Barre; sons; James Alvarez and significant other Patricia Freeman of Gloucester, Massachusetts, and Jeffrey Alvarez and his wife Ellen of Knoxville, Tennessee; granddaughters, Emily Gensler and Grace Alvarez; sister, Evelyn Trono and her husband, Al of Burlington, Vermont; and several nieces and nephews including Marianne and her husband Ivin Silver, Nancy Trono, and Raymond and his wife Theresa Trono. 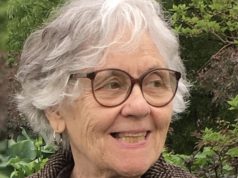 Turtles on the Roadway Need Your Help