Spike in Bike and Motorcycle Deaths Prompts Call for Action

The Vermont Highway Safety Alliance and concerned organizations such as the Burlington-based Local Motion and others are putting out an urgent call for increased road safety awareness with urgent attention to the safety of bicyclists and motorcyclists.

A press release from the Vermont Highway Safety Alliance cites these sobering statistics:

First, some history: in the 10 years before the start of 2015, only one bicyclist in Vermont was killed in a road accident.  But in the first eight months of 2015 — already there have been four bicycle-related fatalities here.

As part of a statewide call to action from the Vermont Highway Safety Alliance, the non-profit organization Local Motion and other concerned groups, there will be a “Rally for Safe Roads in Montpelier on Friday, September 25 at 5:30 p.m. on the State House lawn.

That rally will be headlined by Lt. Governor Phil Scott and will provide an opportunity to hear from legislative and agency leaders and the general public about ideas and proposals for improving road and street safety.

In announcing the Rally for Safe Roads, the organizers asked this question: “Can we get 500 people on the State House lawn?”  Then they exhorted: “Join the call for safe roads for everyone — walking, biking, driving, riding a horse, crossing the road in a snowmobile — you name it.”

MONTPELIER — Starting September 9, structural repairs will begin on the Rialto Bridge, next to Capital Grounds. It is anticipated that this work will be completed by the end of this month. During this time, the contractor (Blow & Cote Construction) will use two to three parking spaces along the bridge for the staging of equipment. Pedestrians on the bridge can anticipate some noise from a generator and some muffled noises from below the bridge. Additionally, during the project, the contractor will need to core some small holes through the top of the bridge to pour concrete. During this work, the bridge will remain open and safe for all pedestrian, bike and vehicular traffic.

MONTPELIER — The members of the Unitarian Church welcome The Rev. Joan Javier-Duval as their minister at an ingathering service and water ceremony September 13. The church members called Javier-Duval in a majority vote this spring. She began serving August 1.

As she took up her duties, Javier-Duval said, “It is an honor to have been called to serve this historic, liberal religious community in the heart of Montpelier. It is a momentous time to begin my ministry at the Unitarian Church of Montpelier as we celebrate our 150th anniversary and reflect on our vision for the future.”

Javier-Duval was raised in Chicago as part of a large Filipino family. She attended Swarthmore College, leading to a career in advocacy and political organizing in Washington, D.C. While attending All Souls Church, Unitarian D.C., she felt a deep call to bridge her faith with her passion for social justice through Unitarian Universalist ministry. She enrolled at Yale Divinity School where she received her Masters of Divinity. She served an internship and consulting ministry at the Unitarian Society of Germantown, Pennsylvania and has supplied pulpits across New England during the past few years.

Joan, her husband, Jared Duval, (a ninth-generation Vermonter) and their son moved to Montpelier in August 2014.

Javier-Duval is described as a warm pastor, a strong and collaborative leader with a passion for community engagement and social justice. In one of her first acts as minister, Javier-Duval led a vigil on the steps of the church in support of the Black Lives Matter campaign reminding us that all can play a role in combating racism and violence.

You can find out more about the church at www.ucmvt.org or call the church office at 223-7861.

Love Poetry Contest To Be Held

MONTPELIER  — Lost Nation Theater is very excited to offer a Poem Writing Contest for high school students and the general community. This is not just any poem-writing contest — it’s a love poem writing contest in honor of our 20th Anniversary production of its first fall foliage Shakespeare performance of As You Like It.

Send your creation in any form — ballad, ode, sonnet, free verse — by midnight, September 20, to: lostnationtheaterlovepoetry@gmail.com

Please identify your submission by name, participating school, and/or community.

MONTPELIER — In preparation for a banner year, Vermont’s pick-your-own orchards will offer a chance to win an Apple product during the “Apples to iPods” promotion that started September 14.

“We’re looking at one of the best crops in years — possibly topping one million bushels,” said Steve Justis, executive director of the Vermont Tree Fruit Growers Association. “We had heavy rain early in the season, but the honeybees stepped up to provide excellent pollination and fruit set. The rest of the summer has given us excellent growing conditions.”

Justis went on to say the annual Apples to iPods contest has been an effective promotion for Vermont’s apple industry.

“Our growers really love the Apples to iPods program,” he said. “For the past several years, the program has encouraged families — especially teens — to visit, explore and pick apples.”

In this technology-meets-agriculture contest, one specially-marked wooden apple is hidden in an apple tree at 24 Vermont pick-your-own apple orchards. The lucky picker who finds a wooden apple wins a randomly selected Apple iPod, iPod Shuffle or iPad.

The state first launched this promotion in 2007 to encourage people to visit pick-your-own orchards. Vermont’s nearly 4,000 acres of commercial apple orchards produce leading apple varieties: McIntosh, Cortland, Red Delicious and Empire. In 1999, the legislature designated the apple as the state fruit, and the apple pie as the state pie.

“Apple picking is a family tradition. In true Vermont fashion, the Apples to iPods contest makes this fall event even more fun for families,” said Megan Smith, commissioner for the Vermont Department of Tourism and Marketing. “Visiting an orchard is the perfect way to experience Vermont’s gorgeous autumn landscape and participate in a festive and family-friendly activity.”

In addition people and groups are invited to visit a participating orchard to purchase extra apples to donate to the Vermont Foodbank. Since 2009, this event made nearly 63,500 pounds of apples available to Vermonters in need.

For a list of participating orchards, please visit www.applestoipods.com. 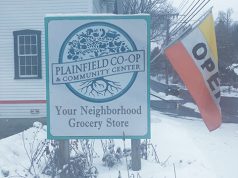