Here we are trundling toward mid-June and we came within two degrees of a killing frost last week! Still, with all our tender vegetables either in the greenhouse or under row cover, we had few worries about the low temperatures. We did pop plastic pots over the lisianthus, zinnias and snapdragons. Everything came through unscathed.

My perennial beds have now moved from spring bulbs and fairy wings to geraniums, early peonies and early daylilies. This concept of early and late bloomers is a useful one. Since perennials are ephemeral — the flowers last a short while — and we want continual blossoms in our gardens, we need to consider not only when different kinds of perennials flower but when different species and varieties of that genus come into bloom.

When we call a plant by its scientific name, we say the genus first, then the species, then the variety or cultivar or both. Varieties are plants of the same species that are different enough to earn their own name, usually because the plant has been genetically enhanced to improve one characteristic or eliminate another. Cultivars are cultivated varieties where a human being has worked on improving the plant through a number of human led processes that do NOT include genetic meddling.

This may seem like more detail than you need to know but it is very useful to remember if you love to grow flowers and want to have the color in your garden continue through the spring, summer and fall.

Consider primroses. The genus name is Primula but there are many more kinds of primroses than what you see in early spring at the grocery store. In fact there are about 500 different species, not to mention all the varieties of those species. I probably have about 10 or 15 different kinds of primroses — thanks to my neighbor Arlene Perkins, otherwise known as the Primrose Lady. Because I have so many different kinds, we enjoy primroses for about two months, each species and variety flowering in succession. By late April or early May, the mauve and pink drumsticks (P. denticulata) are blooming. Now in early June we have a species of Auricula with bright magenta flowers held above the leaves, seemingly irresistible to butterflies.

Paenoia, the genus name for peonies, has between 35 and 50 different species and as many as 3,000 cultivars! While each of my peonies only blooms for about a week, because some bloom very early and some very late, we enjoy peonies for up to six weeks. Most nurseries and catalogs offer detailed information about when specific plants bloom.

I have been continuing to weed the perennial beds, mostly removing violets, Johnny jump ups, campanulas, buttercups and Canadian anemones, all beautiful self-seeders that will take over a bed if you don’t keep after them. I mulch my plants with bark mulch spring and fall. This pretty much takes care of weeds once I’ve done an initial cleaning. The biggest job ahead of me is dividing. I must be doing something right to the soil because many of the plants I divided last year need to be divided again.

Most experts advise that you divide in early spring or fall but when I asked an experienced gardening friend when she divides her plants, she responded, “Whenever I feel like it!” I mostly agree though I would suggest dividing when the sky is overcast and you expect a day or two of drenching rain. Division is hard on plants.

The reasons we divide perennials is threefold; to control their size, rejuvenate them and create new plants. The latter is a bonus. I have built whole new beds largely from divisions.

Some plants are easier to divide than others. Irises are notorious for their rapid expansion and if you don’t divide them frequently, their rhizomes can be impossible to split. Bear in mind that when you divide a peony, you must replant at the same depth as the original. If you plant too deeply it will not produce flowers.

One of the ideas behind controlling a plant’s size is to create space between the plants in your bed. This is called “isolating the plants.” It speaks both to the health of the perennials and to the appearance of the bed. A bed, where each plant flows into the next with no space around it, sounds lovely but it is actually overgrown. A bed where each plant is clearly defined is visually far more appealing.

Deadheading is a rather distressing gardening term but it just means removing spent blossoms. This enhances the plant’s appearance but even more important, it extends the bloom time. Some plants like pinks and perennial salvias, will bloom again later in the season if you shear the spent flowers when they are done their initial blooming.

June is a good time to check for pests on flowers, trees and shrubs. We have a couple of ornamental larches, one of which becomes infected with the larch wooly adelgid early in the season. We checked with the nursery where we bought it and were told that Pyrethrin would work well and it did. So now we check in the spring and nip the infestation in the bud.

If you grow Asiatic lilies, keep a vigilant eye out for the red lily leaf beetle. Left unchecked they will quickly decimate the plants. If you do not want to use a chemical insecticide, hand-picking or a broad spectrum botanical insecticide like Permethrin will help. But you have to keep after them!

Back to the flower beds! Happy Gardening! 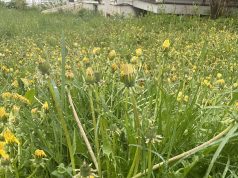 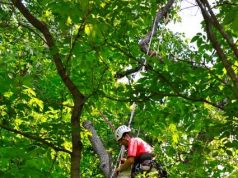