It is one thing to interview a political candidate as part of a press conference — diving in front of TV cameras to get a clear photo and crouching down to take notes — but it is another thing to have a nice long talk with a man who is on what he describes as “a narrow path” to victory. Gubernatorial candidate Scott Milne admits his chances of becoming the next governor of Vermont are slim, but he can see it as a possibility. That is what keeps him going even after former Republican Gov. Jim Douglas (a man for whom Milne says he has “tremendous respect”) suggested he bow out while he is still popular. He told The Bridge being popular isn’t his primary goal. Rather, Milne’s mission is stopping — or at least bringing attention to — what he describes as a pattern of imprudent spending on failed programs with too many cronies on an inflated payroll.

“Since Shumlin came into office, there are, as of Sept. 1, 800 fewer people in the private sector and 1,200 more people working for the state of Vermont. If the private sector isn’t growing, the government shouldn’t be growing,” Milne said.

He acknowledged a similar problem with the education system. There are fewer students and more adult staff with higher spending than ever throughout the state. Vermont pays about $17,500 per pupil while the national average of per pupil spending is around $12,000, according to Milne. This needs to stop, he said, suggesting a plan where the state is divided into 15 educational regions (the same regions as the career technical centers are divided). Then, each region could try to bring down the cost per pupil by pooling resources, or however they can, and be rewarded by getting more money for college tuition. This would create greater incentive for taxpayers and education officials to bring down expenses.

Milne further characterizes Shumlin as a hotshot governor who is taking his lead from the national interests rather than tending to practical, down-home matters. Milne says the move to tie up legislator’s time with genetically modified seed labeling, death with dignity legislation, the whistleblower act and legalization of marijuana takes away from the time needed to straighten out more practical matters that affect all Vermonters every day like jobs, education and taxes.

Milne came in second to Peter Shumlin in the 2014 governor’s race, but by so few votes (about 2,400) that neither candidate got 50 percent of the vote. This means Shumlin won a plurality, but not the majority. Because of cases like this, those who wrote the Vermont Constitution decided in these cases the Legislature must decide who should be governor based on more or different factors than numbers alone. If it were only a matter of numbers, then this constitutional formality would not be necessary because one candidate did get a higher number of votes. The amount of votes tipping Shumlin into the lead could arguably be attributed to the voters of Vermont’s most populated county: Chittenden, although Shumlin beat Milne in five counties while Milne beat Shumlin in nine counties. 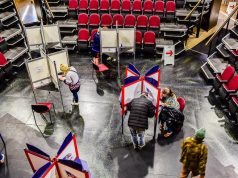