The tomatoes have ripened, the late blight has arrived, and we’ve harvested all the fruit and are getting ready to bag the blighted plants. It certainly is a labor-intensive way to grow tomatoes and I wish we didn’t have to go through this bagging and burying every year. Still, we’ve made about 40 quarts of tomato sauce, with enough tomatoes to make another 40 quarts ripening on the back porch.

In contrast to last September, this bounteous year you see folks wandering around with buckets of cucumbers, zucchinis and tomatoes, looking for someone to take them away. We couldn’t have had a better growing season. Still, it wasn’t that many weeks ago that folks were approaching me, wondering why their tomatoes were slow to ripen.

A little research revealed that the optimum temperature range for ripening mature green tomatoes is 68 to 77 degrees. The further temperatures stray from that optimum, the slower the ripening process will be. We’ve had a really hot summer, which you’d think would mean tomatoes would ripen early and fast. But in addition to temperatures being higher than optimum for ripening, tomatoes do not produce the pigments responsible for ripe tomato color when temperatures rise above 85. Extended periods of extreme heat can thus actually cause tomatoes to stop ripening.

This is the only explanation I was able to find for why I had few if any ripe tomatoes in the middle of August. Two weeks later, I can’t fit them all in my stock pot, and the ones on the porch are ripening faster than I can process them.

I’m back to canning, using my trusty steam canner, an apparatus I’ve mentioned almost every year I’ve been writing this column. Still, it bears writing about again. Steam canners, unlike hot-water-bath canners, only require about two inches of boiling water to process your jars. This is because the sterilization and processing heat is provided by steam rather than a huge vat of boiling water. Steam canners look like hot-water-bath canners turned upside down. Last year we purchased a seven-quart aluminum steam canner to replace the granite ware canner that had finally given out after 30 years. The new one has a built-in temperature indicator that lets you know when the temperature is high enough to start processing your jars. There is no guess work. Timing is easy. This type of canner is available on Amazon for about $50. Worth every penny.

Thankfully, the bush beans have all been harvested and only the pole beans are still producing. Again–I’ve said this before–Fortex, for my money, is the best pole bean on the market. Fortex is an exceptionally long green bean with the incredible benefit that it can sit on the vine for a long time without getting tough. Fortex beans easily grow to a foot in length, remaining tender and delicious. This is a great boon when you are in the midst of harvesting and the zucchinis are relentless.

I’ve been churning out the zucchini bread, substituting a cup of crushed pineapple or apple sauce for some of the oil. My recipe, for two loaves, calls for three cups of grated zucchinis, a half-cup of sugar and only two-thirds of a cup of oil. It makes a very moist and tender loaf with fewer calories. If you’d like the recipe, please contact me in care of The Bridge and I’ll send it along to you.

The peppers have produced heavily enough to warrant making pepper jelly again this year. That and chimichurri, an Argentinean sauce made with fresh parsley, oregano, olive oil, garlic, vinegar and red pepper flakes, have become standbys in our kitchen. I freeze the sauce in ice cube trays, as I do with pesto. I usually use it as a marinade for grilled meats and fish, but I also add it to quiches, empanadas and chicken pot pies. It greatly enhances the flavor of those dishes.

Way back in April, I was so focused on having enough tomatillos that I started some from seed. As a result I have both early tomatillos and enough self-seeded ones to produce second, third and even fourth crops. I suspect I’ll be making salsa verde into November!

I have found salsa verde to be a great im-

provement over the salsa I made in the past, which required roasting the tomatillos before processing. Salsa verde is made with fresh tomatillos, onions, garlic, cilantro and habaneros or a jalapeno or two. You put them all in the blender and puree them until smooth. Then you put some olive oil in a saucepan, heat it to just before the smoking point, and add the salsa verde mixture. That’s when you cook it. When the mixture has turned from pale to dark green, it is ready to can, freeze or eat. We go through tons of the stuff, on tortillas and nachos, and as a sauce for omelets as well as chicken.

The funny thing about all this cooking and processing is that only a few years ago I had never heard of any of these sauces and jellies. The recipes emerged from the abundance of produce in the garden. Now it seems we can’t do without them.

That has probably been my biggest lesson this year. Much as I’ve enjoyed the okra, napa cabbage, two kinds of storage cabbage, three kinds of chard, and four kinds of basil—you get the picture—I’m having trouble keeping up! I’ve always advised people to plant what they like to eat, but it turns out we like to eat almost everything! So my new advice is to plant what you like to eat and can keep up with! Happy harvesting! 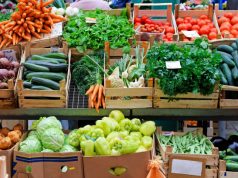 Making Local Foods Accessible for All 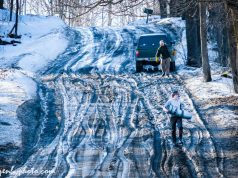