Home Arts Literature BOOK REVIEW: Surfing the Light: An Artist's Ten Year Photo-Safari into the...
Facebook
Twitter
Email
by Nat Frothingham
Montpelier resident Michael T. Jermyn has published a new book of photographs entitled, Surfing the Light:An Artist’s Ten Year Photo-Safari into the Heart of Vermont. In his introduction, Jermyn describes himself not just as a photographer but as a writer, musician, storyteller, storm chaser and part-time relic hunter.
In his introduction, Jermyn recounts a visit he made about 20 years ago to a second-hand bookstore in rural Connecticut. As he pawed through a stack of books, he came upon photographer and writer Wallace Nutting’s book Vermont Beautiful—page after page of sepia-toned images of the Green Mountain State. Here’s how Jermyn picks up the story in his introductory essay:

A few years later, I found myself visiting a friend who had recently relocated to Vermont.  Much to my surprise, I discovered that Mr. Nutting’s Vermont, that he so meticulously captured with his big, eighty-pound land camera while traveling around in a Model T, was basically still there and unchanged after eighty years. Sure, it took a little investigation and some exploring up into the hill country, but it was still intact. The centuries-old churches and sleepy hamlets, the sturdy covered bridges, the picturesque dirt roads winding through the bucolic countryside, the handsome brick mansions, the healthy cattle grazing in the endless fields of green, the old towns with their village greens and charming country stores, the old barns and silos, all were still there.

A few years after discovering Nutting’s book, Jermyn visited Vermont and was astonished to discover how much of the state’s pastoral imagery remained. Eventually he and his family moved to Vermont, and over a 10-year period he ventured into the countryside and captured, often unforgettably, Vermont’s pastoral beauty, its white churches and barnyard animals, farm machinery in abandoned fields, and the people who live here, both old and young.
What most distinguishes Jermyn’s book of photographs from other picture books of Vermont is the poetic power of his images, most clearly visible in Jermyn’s photographs of weather—clouds, trees and skies. I can’t remember another photographer who has taken us more deeply into the October allegory of life and death, that achingly sad and beautiful season when the leaves are turning and falling with colors that are intensely red, gold, scarlet, crimson and crimson-black.
Michael Jermyn has recently donated Surfing the Light to the Kellogg-Hubbard Library in Montpelier. He will also be appearing in concert at Nutty Steph’s in Middlesex on Sunday afternoon, July 8 from 1:00 to 3:00 p.m. in a program he is calling, “A Leisurely Afternoon of Songs and Pictures.” 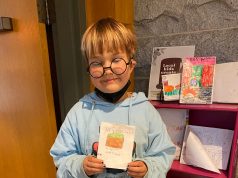