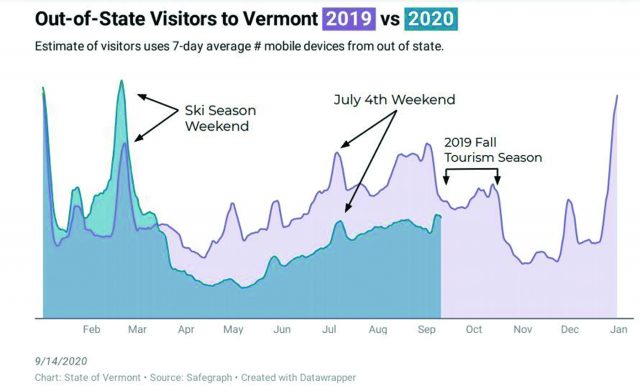 While the lockdown brought much of Vermont’s economy to a near standstill during April and May, some sectors remained stable, grocery sales in particular. Others showed at least partial recovery by June, and for some, business remains below pre-pandemic levels.

Locally, Montpelier Alive has made a consistent effort to encourage residents to shop locally in support of the city’s small businesses. Executive Director Dan Groberg has surveyed local business and provided the following summary:

Ken Jones, a long-time Montpelier resident who compiles economic impact data for the Agency of Commerce and Community Development, has assembled statewide data represented through credit card spending. The data set, which is representative of about 40 percent of all spending in Vermont, has been one metric in an ongoing study to estimate visitor spending, but this year it provides an overview of trends in resident spending as well, since visitor spending contracted dramatically from March through June.

According to the statewide Vermont credit card data in comparison with the previous year, even the grocery and supermarket sector suffered a contraction of 44.3 percent during April, when stay-at-home was observed full force. But both May (up 11.1 percent) and June (up 13.1 percent) showed a significant increase in grocery shopping as people were preparing meals at home.

One sector of Vermont’s economy that stands out for growth during the lockdown is home improvement (see graph below).

For many people being home with time on their hands was an opportunity to undertake DIY projects around the house. Hardware stores and lumber yards joined grocery stores as the busiest places in Montpelier and many commercial centers around the state.

Health and beauty spas is a sector that began making some recovery during May and June (see graph below), as shops reopened for customers gradually emerging from the lockdown of March and April.

During a normal year Jones has applied several data sources to provide reliable estimates about economic activity and the impact of visitor spending in the recreation and hospitality sectors. In addition to the credit card data, the larger analysis includes interstate traffic counts, estimated spending by second homeowners, lodging occupancy and taxable receipts. The most recent publication, a 2017 benchmark is available at accd.vermont.gov/sites/accdnew/files/documents/VDTM/BenchmarkStudy/VDTM-Research-2017BenchmarkStudyFullReport.pdf

While the Tax Department’s preliminary report for April 2020 showed Montpelier’s taxable receipts for sales of meals down more than 74 percent, the preliminary report for May 2020 still shows a nearly 60 percent fall in sales year over year. (Jones notes that because tax filing deadlines were suspended from April through June, the tax data for 2020 may be both incomplete and unreliable at this point.)

These percentages are likely to show improvement for the months June through September, as more restaurants opened outdoor seating or set up meals-to-go services. The Tax Department makes preliminary reports 75 days after the close of each month and updates the reports after 180 days.

A new strategy for measuring visitor traffic into Vermont was introduced by Department of Financial Regulation Commissioner Michael Pieciak at the Governor’s September 18 news conference. The analysis relies on tracking the locations of mobile devices by GPS, the same strategy that is used to provide up-to-the-minute reports on traffic congestion in urban areas. The graph below shows a comparison of out-of-state travel into Vermont during 2019 versus 2020.

The persisting decline in out-of-state visitors means that the survival of local hospitality businesses depends greatly on the support of local residents. Montpelier Alive’s Groberg summed his concerns, concluding, “As we enter into the colder months, with outdoor dining options disappearing, I am most worried about hospitality businesses. If people want a thriving downtown, it’s time to turn those words into action and invest in Montpelier by shopping and dining at Montpelier businesses this winter.”