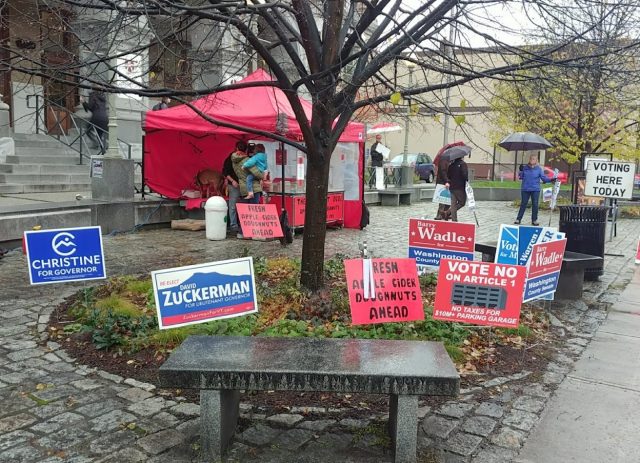 As a result of the pandemic, voting in state and federal elections in Vermont this year will be different than in most years. For one thing, every active registered voter in the state will be mailed a ballot in the last two weeks of September, and those ballots can be mailed back in or dropped off at city clerks as soon as voters receive them.

For those who would prefer to vote in person on Nov. 3, the polls will be open from 7 a.m. to 7 p.m., as usual. There could be longer lines than normal because — due to coronavirus concerns — only a limited number of people will be allowed into voting areas at one time.

President Donald J. Trump has claimed that anything other than in-person voting is subject to fraud, while many Democratic leaders have expressed concern that vote-counting will be delayed or cut off somehow in what is turning out to be a fiery presidential election year, or that the post office may not be funded sufficiently or be prepared to handle a potentially huge wave of mailed ballots.

Montpelier Deputy City Clerk Crystal Chase says that from the city’s perspective, “I don’t foresee any big problems,” even with a bigger than expected number of mail-in or dropped-off ballots. But in case the post office becomes overwhelmed, she recommends those mailing in their ballots do so as soon as possible (the Secretary of State’s office is urging Vermonters to mail in their ballots by Oct. 24). “If the ballots come in after election day, they will not be counted,” Chase said. In some other states, ballots only need to be postmarked by Nov. 3.

For those who want to deliver their ballots to city hall before election day, there will be two options, Chase said. One is to bring them into the City Clerk’s office on either a Tuesday or Thursday, between 8:00 a.m. and 4:30 p.m. Those are the only times the office is currently open to the public. The other option is to put them into a special locked drop-box for ballots that will be placed outside the rear door of City Hall once ballots are mailed. That box will be checked regularly.

Chase said the Vermont Secretary of State’s office is expected to begin mailing out ballots to every registered voter on Sept. 24. Those who do not receive one by Oct. 1 or so should call the City Clerk’s office. Qualifying residents who have not registered to vote can do so any time through Nov. 3, either online or by coming into the office, Chase said. The office will supply ballots to newly registered voters.

Mailed-in and dropped-off ballots are not opened and tabulated until election day, but counting them should be finished the same day, Chase said. She does not expect there will be any delay in reporting Montpelier results this year.

Concerns expressed by Trump that voters might be able to vote twice, once by mail and once in person, are unfounded in Montpelier’s case, according to Chase. As soon as a ballot is received in the mail or by drop-off, the voter’s name is recorded by the city. The checklist that is used when voters come to vote in person will indicate whether they have already voted.

What if someone’s mailed in ballot did not arrive until Nov. 3, and they also tried to vote that day? “If someone voted in the morning, and then their ballot came in the mail later that day, their morning vote would count but the mailed-in ballot would not,” Chase said. “We have not had those kinds of problems in the past, but if someone tried to vote twice, we would report it to the Secretary of State’s office,” she said.