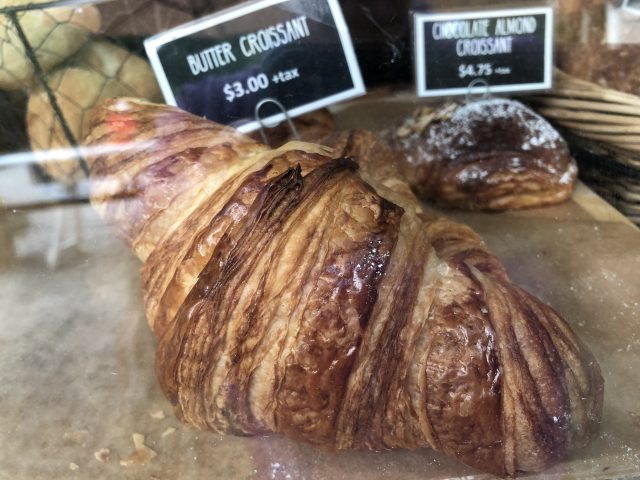 Breaking bread with a person fills far more than a hungry stomach; it represents an act of generosity, love, and community — a wing flutter of the better angels of our nature. Certainly for Central Vermont bakers that’s the case (well, maybe not at 5 a.m.), and in times like these, their devoted customers find extra comfort in its flaky, fluffy texture and warm, reassuring, grandma’s-house aroma. Breathe deeply at these Central Vermont bakeries. You’ll also taste Vermont itself, thanks to bakers’ dedication to using local eggs, flour, milk, butter, and other ingredients whenever possible. Taste for yourself at these Central Vermont bakeries rising to the occasion.

One of the longest serving Central Vermont bakeries, Manghis’ has kept its ovens turning out fresh bread since 1981, when Elaine and Paul Manghi opened for business in the Victorian Prentiss House behind the Kellogg Hubbard Library. Now under their daughter Maria Manghi Stoufer and her husband Steve, Manghi’s continues the tradition, with everything from basic white to rye, whole wheat, and sourdough, plus more exotic challah, spelt, maple walnut, and bourbon (Oct–Dec). Manghis’ dedication to sustainable practice manifests in its unique delivery system, which employs volunteer commuters traveling to and from Montpelier and nearby towns; payment is in bread. manghisbread.com

Jennifer Toce and John Belding have turned this bakery along Elm Street into a must-stop pit-stop, thanks to their ability turn sweet dreams into reality with specialty cupcakes, scones, chocolate chip cookies, almond tea cakes, English muffins, strawberry vanilla bean brioche, and salted caramel cake, among many others. Birchgrove’s activist edge also channels into efforts such as selling cookies to benefit Justice for All, which pursues racial justice within Vermont’s criminal justice system. But perhaps nothing means more to the owners than sharing comforting cups of coffee with people who have meant so much to them—perhaps now more than ever. birchgrovebaking.com

Even fellow bakers can be found at the counter of this downtown spot that sees steady traffic nearly every minute it’s open. Perhaps it’s their dedication to “performing” their recipes rather than just preparing them. Or perhaps it’s Bohemian’s mantra of “All the butter, All the sugar, All the caffeine, All the time” that spins the magic. Whatever the case, it makes for some gobsmacking croissants in ham and cheese, almond, spinach and feta, and original butter varieties. On top of that find fruited tarts, danishes, chocolate swirl, Breton butter cake, and almond cake with raspberry jam filling and chocolate ganache. That’s all the evidence you need to see why Yankee Magazine described Bohemian as “divine.”bohemianbakeryvt.com

This Barre bakery’s secret weapon is NECI-graduate Chef Tim Boltin, who combines culinary passion, professional training, and the discipline of 20 years in the Air Force in his menu of pastries, pies, cakes, cookies, and macaroons (chocolate dipped!), not to mention loaves of baguettes, sourdough, brioches, and ciabattas. Also appreciated nowadays are his weekly take-home meals on Wednesday nights. For just $26, get four portions of dishes such as cider-braised pork loin, roasted potatoes and summer squash; Greek salad with chicken and garlic pita; and Swedish meatballs with egg noodles and vegetables. delicate-decadence.com

The legend of Red Hen’s bread making skills finds expression as the go-to sandwich bookends in cafes, delis, and restaurants throughout the state. It didn’t just happen by magic either, but rather from more than two decades of hard work that saw the original tiny operation expand into a custom-built complex (incorporating the former Camp Meade Diner) along U.S Route 2 in Middlesex. A favorite for families, a glass wall looking into the kitchen at one end of the café lets you see baking in action (at least on normal days). After the sugar injection from the maple-frosted cinnamon bun, pain au chocolat, spicy brownies, and fruit galettes, let the kids burn it off in the quirky campground out back. redhenbaking.com

In 1992, Glenn Loati traveled to Italy to seek both his family roots and traditional Italian baking techniques. Returning home with the second, he and wife Lori began selling bread on the side at the Montpelier Farmers Market. Demand exploded almost immediately, thanks in part to the slow, traditional Italian baking process, allowing the couple to quit their day jobs and devote themselves fully to the baking arts just two years later. Since then, their cinnamon raisin, cracked wheat and honey, Siciliano sesame bread, and pane Toscano fill the shelves of ever greater numbers of shops throughout Vermont, from the local coops to supermarkets such as Shaw’s and Hannaford. lapanciata.com